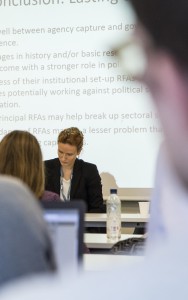 These are some overarching questions addressed by the panel ‘Research Executive Agencies – between Independent Organisations and Governments’ organised by Lisa Kressin and Sarah Glück in the Section on the Politics of Higher Education, Research and Innovation at the European Consortium for Political Research ECPR General Conference 6-9 September in Oslo. The papers in this panel examine the historical trajectories, discursive contexts in the institutionalisation processes and the actual workings of the research funding executive agencies in Germany, Austria, the Nordic region and the European Union.

In some German-speaking national contexts, there is a practice of agencification in which the principals (ministries) play the role of defining political strategies, framework and rules, and let the agents (the executive agencies) be in charge of implementation processes and manage public research funds on the government’s behalf. Rupert Pichler and Sascha Ruhland, in their paper titled ‘The role of research funding agencies in policy discretion and coordination in Austria’, examined multiple funding agencies and focus on the case of the Austrian Research Promotion Agency (FFG) – a merger of several fragmented funding organisations. FFG has a legal form of a limited company and has the mandates to serve many ministries, provincial governments and the EU. They argued that the very nature of multi-principal and multi-sector agency has put FFG in a position to propose strategic plans that are to be approved by the various ministries. Sometimes the inter-ministerial negotiations are outsourced to FFG. In essence, the principals are coordinated by the agent rather than being in the driver’s seat, thus blurring the boundaries between principal’s and agent’s tasks and roles. They concluded that although principals and agents are deeply entangled, there are always ‘lasting tensions’ oscillating between agency capture and government interference. Therefore, the principal-agent relationship is constantly adjusted.

Que Anh Dang presented the paper ‘Nordic Umbrella Organisations for Higher Education and Research: Region-building and Market-making’ and highlighted the case of the Nordic research funding executive agency – NordForsk. Although NordForsk was established in 2005 in the aftermath of the Lisbon Strategy with a competitiveness boosting agenda, it was rooted in the long-standing Nordic regional cooperation in many sectors. NordForsk is ‘old wine in a new bottle’ and it represents a continuation of previous regional initiatives and the Nordic informal and pragmatic approach to cooperation. However, NordForsk has constituted new spaces for policy making which alter regional governance pattern. She argued that, in the Nordic case, these new spaces are not located above the state, rather, regional frontiers are created within the national policy-making apparatus including its political institutions. NordForsk is not about the emergence, consolidation or sustainability of the supranational authority but about the rescaling of governance and pubic authority to regional spaces – a politics of regionalism that is simultaneously regional and national. The legitimacy of intermediary agencies, like NordForsk, is secured through various forms of accountability. Such accountability is ensured by ‘accountability communities’- a complex ensemble of public and private organisations endowed with capacities to perform legislative, monitoring and compliance activities. Que Anh concluded that these communities also possess particular understandings of accountability (soft law of standards and codes) and provide the basis for new ways of region-building and market-making. 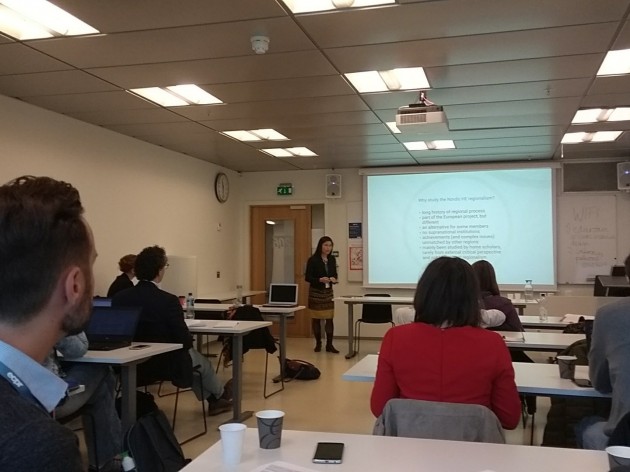 Thomas König, one of the panellists, launched his new book ‘The European Research Council’ (ERC) during the conference. This book is a comprehensive research into the creation and development of the ERC. With an ethnographic method, Thomas gives a detailed account of how a group of strong-minded European scientists succeeded in establishing the ERC by pushing for a single goal: more money for scientific research with fewer strings attached. The book also critically analyses the achievements and challenges faced by the ERC and engages with a broader question concerning the relationships between politics, science and public money.

Presentations in this panel prompted some reflections and ideas for further empirical studies:

–          The classical principal-agent theory is deficient in explaining the complex relationships between the research funding executive agencies and their founders and funders (be it national or regional bodies). We need new theories and novel ways of understanding the power relations between the principals (ministries, group of states, supranational union) and the agents (intermediary agencies);

–          Although the agents derive their authority from their expertise, they have to constantly negotiate and secure their legitimacy and autonomy in various ways and with a range of actors including the principals, academic communities, the society and the wider public (tax-payers);

–          Neoliberalism constitutes the hegemonic economic discourse within science and innovation which introduces a new mode of regulation premised on the belief that competition – in the name of ‘Excellence’– is the most efficient and a morally superior mechanism for allocating resources and opportunities. The workings of all these agencies are governed, albeit at varying degrees, by this economic discourse and its accompanied contractual relations;

–          The research funding executive agencies take on multiple identities depending on which actors they interact with. Despite their motto to uphold academic freedom and support investigator-driven research, they often act as translators and mediators between politics, science and administration.

In summary, the panel provides deep insights into concrete case studies and offers new ways of understanding intermediary agencies and the implications for research policies in the complex governance structures in Europe. We wish to exchange ideas and learn from more case studies in other national and regional contexts to broaden our scholarship.

Dr. Que Anh Dang is a researcher at the German Institute of Global and Area Studies, Hamburg. Her research interests include higher education and regionalism, the role of international organisations in policy making, higher education in the knowledge economy, and education diplomacy. She is a co-editor and an author of the book ‘Global Regionalisms and Higher Education’ (2016).