This year’s ECPR (European Consortium of Political Research) General Conference took place at the University of Oslo between September 6-9. The conference included hundreds of panels on a wide array of topics and representation from close to 2,000 academics from around the world. The ECPR Standing Group on the Politics of Higher Education, Research and Innovation, for the sixth time in a row (following Prague 2016, Montreal 2015, Glasgow 2014, Bordeaux 2013 and Reykjavik 2011) organised a section with a total of six panels covering various themes related to knowledge policy governance.

The section opened with the panel European Integration in the Knowledge Domain –
Taking Stock and Forward Outlook. The panel was based on the research agenda presented in Maassen and Olsen’s (2007) seminal book “University Dynamics and European Integration”. Peter Maassen began by reflecting on the book’s contribution to empirical and theoretical work on higher education research. Mari Elken presented a paper outlining ideas for further developing the research agenda on European higher education and emphasizing the importance of considering the complex ecology involved. Jens Jungblut followed with a discussion of the political contestations involved in the implementation of European policy ideas at the national level. Finally, Meng-Hsuan Chou and Pauline Ravinet presented their research on higher education regionalism, discussing its potential for contemporary political research as well as the importance of comparing regions ‘beyond Europe’ to further develop this field.

The following panel – Policy translation, adaptation and complexity in higher education, research and innovation – explored the various conditions which shape knowledge policy design. Hila Zahavi presented her research assessing the manner in which the EU’s foreign policy interests are embedded in various EU funded higher education programs. Teresa Patricio’s paper explored the research and higher education policy implications involved in complex international collaborations through the example of Portuguese university partnerships. Davide Donina then presented his paper on the examination of New Public Management features in Portuguese and Italian higher education systems, through a comparative and multi-level analysis. Hannah Moscovitz’s paper addressed the role of territorial identity-related interests in the design of knowledge policy from a subnational perspective. Finally, Sandra Hasanefendic’s paper examined the different responses to a new research policy implemented in two Portuguese poly-technics, revealing that the heterogeneous responses can be attributed to unique organisational structures.

The third panel highlighted empirical and theoretical contributions to research on the Policy, Governance and Organisational Change in Higher Education. Martina Vukasovic opened the panel with a discussion of the term ‘loose coupling’ in higher education research – outlining how it has been used, discussing some lacunas in its empirical application and opening avenues for future use. Sara Diogo then presented her paper on the influence of the OECD on European higher education, highlighting the diffusion of educational trends in Portugal and Finland. Roland Bloch followed with a presentation on the role played by the German Excellence Initiative in the proliferation of doctoral programs and its impact on the overall structure of German higher education. Agnete Vabo’s paper assessed how university mergers affect institutional autonomy and strategic steering, shedding light on the diversification involved. The panel concluded with a presentation by Ivar Bleiklie on the potential for discussing a Scandanavian model for higher education through a consideration of the commonalities and differences between Scandinavian countries’ higher education models.

The panel on Research Executive Agencies – Independent Organizations or the Extension of Research Policymakers?, aimed to prompt a discussion on research executive agencies (REAs) and their implications for knowledge policy research. Sarah Glück introduced the panel by highlighting the importance of scrutinising REAs in order to understand the competing logics inherent in science policy systems. Rupert Pichler and Sascha Ruhland’s paper analysed the normative framework governing research funding agencies, focusing on a number of dynamics impacting Austrian government policies in this domain. Que Anh Dang’s presentation explored Nordic higher education regionalism revealing how regional research agencies have contributed to new forms of region-building and market making in the area. Thomas König and Tim Flink’s paper assessed the challenges of the ERC for European research policy which they attribute to both its organisational framework and discursive compromises it undertakes. Finally, Inga Ulnicane presented her work on the concept of ‘grand challenges’, assessing whether it represents a new paradigm in science, technology and innovation policy.

The panel Unbundling knowledge production and knowledge dissemination aimed to conceptualise the ‘unbundling’ of knowledge policy; examining the different actors involved, understanding the consequences of such processes and implications for the university’s perceived role in society. Farah Purwaningrum’s paper discussed the understanding of the university’s third mission in Malaysia, specifically asking how the idea of the third mission as perceived by the Malaysian Ministry of Education affects knowledge production in Malaysian universities? Joonha Jeon’s paper assessed how New Public Management has influenced the realization of universities’ ‘third mission’, highlighting university-industry links in South Korea. Finally, Janja Komljenovic presented her paper assessing the unbundling processes evident in university social media marketing strategies. Through the example of LinkedIn, the study shows an important connection between higher education, markets and digital platforms.

The topic of the last panel in the section was Quality and Effectiveness of Governance in Higher Education: Unpacking the Quality of Governance and Effects of Governance Changes in Higher Education Policies. The panel comprised five papers. First, Michael Dobbins presented a comparative study on German and Swiss higher education reforms which, in response to similar challenges such as globalization and competition pressures, took two distinct (and somewhat unexpected routes) – decentralization and centralization, respectively. Giliberto Capano presented the study he co-authored with Andrea Pritoni on whether increasing autonomy can account for changes in education performance in Western European higher education systems. Meng-Hsuan Chou presented the paper co-authored with Pauline Ravinet concerning effectiveness of inter-regional policy dialogues, in particular focusing on cooperation between EU and ASEAN in the form of EU-SHARE project. Beverly Barrett presented a paper on higher education in Latin America, Portugal and Spain. The panel concluded with a paper by Jens Jungblut and Peter Maassen focusing on quality of governance in sub-Saharan Africa, which, amongst other, provided also a conceptual contribution concerning two dimensions of quality of governance – autonomy and capacity.

Apart from the panels in this section, the members of the Standing Group also took part in other sessions, including:

–          Roundtable on the consequences of internationalization of political science education

–          Transformation of the Political Studies Profession: What does it mean to be an Active Academic in the Current Era? 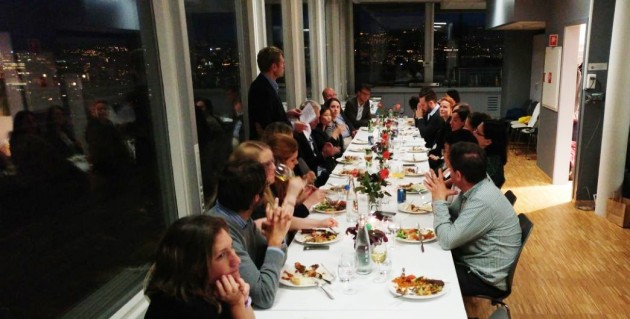 Standing Group dinner at the Nordic Institute for Studies in Innovation, Research and Education NIFU

As has become tradition, the Standing Group also had its annual meeting focused on planning future activities, including ECPR 2018 which will take place in Hamburg. The meeting was also marked by the Award for Excellent Paper from an Emerging Scholar to Que Anh Dang for her paper “The Bologna and ASEM Education Secretariats: Authority of Transnational Actor in Regional Higher Education Policy”. Standing Group members attended the keynote lecture by Johan P. Olsen “Democratic Accountability and the Changing European Political Order” and enjoyed the very generous hospitality of the Nordic Institute for Studies in Innovation, Research and Education NIFU, which hosted the traditional Standing Group dinner.

ECPR 2017 was another successful year for our Standing Group, gathering researchers from 20 different countries, currently based on three continents (Asia, Europe and North America). See you in the next ECPR General Conference in Hamburg in August 2018!