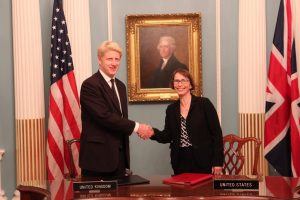 The signing
ceremony of a science agreement between the US and the UK in 2017. Photo credits: The State Department

In a recent paper, Simon Marginson (2021) analyzes four competing narratives commonly used to explain the growth of global science. He concludes that each of the predominant narratives—growth of networks, international arms races, global markets, and centre-periphery models—falls short from fully explaining all facets of the phenomenon of global science. Consequently, Marginson calls for research that is more concerned with the connections between the semi-autonomous scientific system and political and economic actors and interventions.

Science and technology agreements – a measure of science diplomacy?

One phenomenon in which precisely these connections emerge very visibly is the field of science diplomacy at the intersection of foreign affairs and (international) science policy. Within this field, bilateral science and technology agreements (STA) are often cited as exemplary instruments of international science policy strategies. STA are bilateral umbrella agreements at the governmental level in which measures for scientific and technological cooperation such as the exchange of students and researchers or the handling of intellectual property rights are described and agreed upon. Although such agreements are situated directly at the intersection of foreign affairs and research policy, there are few studies that address them (Dolan, 2012; Fikkers & Horvart, 2014; Rüffin & Schreiterer, 2017; Sabzalieva et al., 2021). One reason for this lack of academic research might be that data on STA has been scattered across many places. In contrast to multilateral and bilateral treaties on economic issues or security that are available via repositories of the World Bank or the UN, STA have lacked any centralized record. On the contrary: each country provides—if at all—its own information on STA. In consequence, the scope, quality, and availability of these data are subject to strong fluctuations.

The new and freely available dataset B-STA-R (Rüffin, 2021) is meant to counter this argument of missing data and cumbersome data collection. In this dataset, information on 1138 original bilateral agreements as well as on a number of subsequent agreements was collected from sources of almost all G20 and OECD countries. The dataset covers the period between 1937 and 2020. It contains information on the date of conclusion, the entry into force, the originally agreed duration, and the reliability of the data entry. The dataset also includes information on the existence of individual contract documents and in many cases also references to the respective national data source. This means that full texts of over 850 STA can be found and analyzed using B-STA-R. Detailed descriptions of the individual variables are available in a separate codebook.

Patterns in the conclusion of STA

A first glimpse into the data already offers some interesting insights on trends in science diplomacy both over time and with regard to individual countries. Even without in-depth analysis, the dataset illustrates that the number of agreements concluded between 1950 and 1990 corresponds roughly to the different phases of Détente and rising Cold War tensions. For instance, Western countries and states of the Eastern bloc showed a higher number of bilateral agreements in the 1970s, corresponding with initiatives like the German “new Ostpolitik” and the Conference on Security and Co-operation in Europe. After 1990, we see another rise of STA between formerly Soviet-dominated, newly independent countries and states from the Western bloc.

Apart from these general trends, a glance at the STA of individual countries also reveals some interesting patterns. For instance, we can see that the pattern of STA concluded by the People’s Republic of China corresponds with the geopolitical orientation of the Communist leadership. While early agreements were concluded with allies in the communist bloc, the Sino-Soviet split and the thaw in relations between Western countries and China in the 1970s are quite directly represented in the data. South Africa is another example of the seemingly strategic use of bilateral agreements. Here we can find a surge of new international agreements after 1995 very much in parallel to the end of the Apartheid-era and the election of the first ANC government. Moreover, South Africa conducts very extensive intra-African science diplomacy via STA since the transformations of the 1990s.

These glimpses are just a few examples to illustrate that the dataset can be put to good use by interested scholars. In light of the points raised by Marginson, a whole series of questions can be addressed with the help of the dataset, in particular if combined with other sources and statistics, e.g.  from UNESCO or World Bank databases. Potential questions could be:

Do such agreements have any effects at all on the scientific networks between the participating countries? Do they, for instance, result in increased contacts between researchers from both countries and thus support the emergence of global science networks? Or are STA primarily determined by foreign policy strategies? Is there an interplay between scientific and political rationales? Are there unintended consequences of STA? Moreover: Is there some kind of global or regional diffusion of STA? And last but not least: Has the role and importance of STA shifted in line with changing conditions in the geopolitics of science and technology?

Of course, it is up to interested users to use the data for useful purposes. To maximize the usability of the new dataset, it is freely accessible under a CC BY 4.0 license. It is planned to expand the dataset in the future to cover more countries, to further increase the reliability of data, and to integrate additional information on the existing entries. Thus, feedback from users of the dataset is highly appreciated to further improve future editions of B-STA-R. In any event, the hope is that the data will be used to provide new answers to important and pressing research questions on global science, science diplomacy, and international science policymaking.

Nicolas Rüffin is Visiting Researcher of the President’s Research Group at the WZB Berlin Social Science Center and is currently working on his PhD thesis on patterns in the politics of big science organizations at the University of Kassel, Germany. He joined the WZB in 2016, after receiving a master’s degree in science studies from the Humboldt-University of Berlin, and a bachelor’s degree in business psychology from the University of Bochum. His research mainly focuses on issues of international science policy, the politics of intergovernmental big science projects, and science diplomacy.