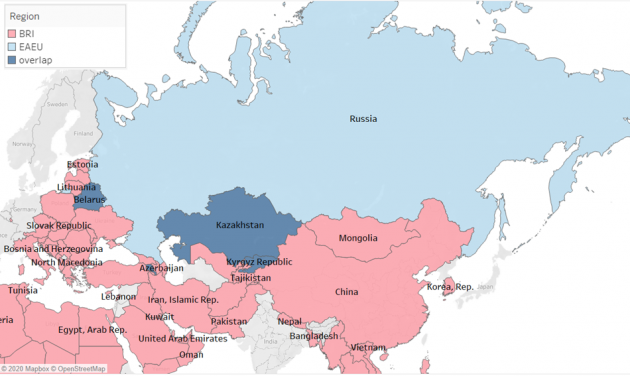 Map of the Belt and Road Initiative, Eurasian Economic Union and their overlap in Central Asia, prepared by Natalia Leskina

China, Russia and their regional projects intersecting in Central Asia – Belt and Road Initiative (BRI) and Eurasian Economic Union (EAEU) – have been in the limelight recently. Despite the fact that educational component pays an important role in both the EAEU and BRI, the information about their educational initiatives remains scarce. That is why with my colleague Emma Sabzalieva we started our research by asking: how are Russian and Chinese led visions for Eurasian higher education regionalism developing in Central Asia, and to what extent do these visions overlap? how do the Central Asian states approach this presumed role in Eurasian higher education regionalism?

Despite common expectations that the interests of Russia and China in Central Asia are in competition and could lead to confrontation, researchers have found out that instead, they operate harmoniously in the region. This has been explained by “the division of labor”: in other words, Russia’s military power does not confront China’s economic power.

But this explanation does not match the higher education policy area, where similar ideas on a Eurasian higher education area are fostered by Russia and China: both EAEU and BRI include higher education as a complementary to other competences, and the regions are planned to be built in similar ways through the mutual recognition of qualifications, joint degrees, and academic mobility. Both competition and collaboration can be found in the overlap of the EAEU and BRI educational components in Central Asia.

Why to use “points of correspondence” instead of collaboration/ competition?

We found out that relations between China and Russia are more nuanced than the collaboration/competition dichotomy. This finding led us to search for concepts that would adequately grasp the regional dynamics at play. In doing so, we turned to the original concepts developed by China, Russia and Central Asian states.

Thus, we introduced the “points of correspondence” concept to describe the current configuration in Eurasia. This concept is derived from the Russian term “sopryazhenie” (сопряжение) and Chinese zui jia qi he dian (最佳契合点) and means “the ongoing pursuit to find ideas and policy tools that best fit one another” without flowing into each other.

At the third Ghent – Russia Colloquium in 2019, Prof. Yang Cheng compared Sino-Russia relations with a family: even if you do not like each other, you are linked and therefore you need to compromise and find a way to live together because of the common duties. This way of thinking is incorporated in the “points of correspondence” that allow both competition and collaboration.

It also shows how the position of Central Asian states allows this co-existence and also is a tool to exert their agency that shapes Eurasian regionalism. At the same time, each of the parties has its own understanding of what “points of correspondence” actually means.

“Points of correspondence” as coordination between Russia and China

For Russia “points of correspondence” means “coordinated and parallel development” of the China-led BRI together with the EAEU. In practical terms it implies that Beijing should respect Moscow’s interests in the post-Soviet space, i.e. any integration issues have to be discussed at the regional level instead of bilateral agreements that may seem to be behind Russia’s back.

BRI also seeks connectivity with the regions already in place. But China has a slightly different view on the coordination: it understands the need to show respect for Russia’s interests and to this end is ready to engage in official dialogue, but at the same time Beijing still prefers to handle issues at the bilateral level.

Effectively, in 2019 China and Russia signed a cooperation agreement between the EAEU and BRI following a joint statement four years before. But Beijing still puts great emphasis on bilateral agreements in higher education: in 2017 China had signed bilateral agreements on mutual recognition of qualifications with Kazakhstan, Kyrgyzstan, Turkmenistan, and Uzbekistan. The same comes to the allocation of mobility scholarships and participation in the BRI university alliances.

In general, the Central Asian states welcome both BRI and EAEU, but to a different extent. Kazakhstan has its own vision of a Eurasian higher education area and actively promoted it so far, making wide-ranging propositions from the development of mobility to the recognition of qualifications and a Eurasian university ranking. Kyrgyzstan and Tajikistan welcome both BRI and EAEU, emphasizing the need for new technologies and innovations to revitalize the economies of the region. Turkmenistan and, until recently, Uzbekistan remain on the most neutral end of this spectrum of responses to the new initiatives.

Instrumentally, Central Asian states engage China and Russia in points of correspondence as a way to balance their ambitions in the region. Simultaneous participation in overlapping regionalisms allows them to choose bilateral or multilateral format, to engage with China’s or Russia’s vision, depending on the issue at stake, and ultimately, to shape the actual regionalism on the ground.

The “points of correspondence” emerging between the EAEU and BRI in Central Asia characterize the development of Eurasian higher education regionalism and add new nuances to the research of education areas beyond Europe. At the same time, our findings raise questions about the extent to which “points of correspondence” could travel beyond this area and factors that contribute to their emergence.

Our paper is part of Special Issue of Eurasian Geography and Economics on Sino-Russian relations edited by Fabienne Bossuyt and Marcin Kaczmarski. Here you can read our article in full. If you are interested to know how our article came into being, you can read Emma’s blog. This article was presented at the Knowledge Politics and Policies section of the virtual ECPR General Conference in 2020.

Natalia Leskina is a doctoral researcher at the Department of International Relations at Ural Federal University, Russia. Her research interest is higher education regionalism with a regional focus on the post-Soviet space.