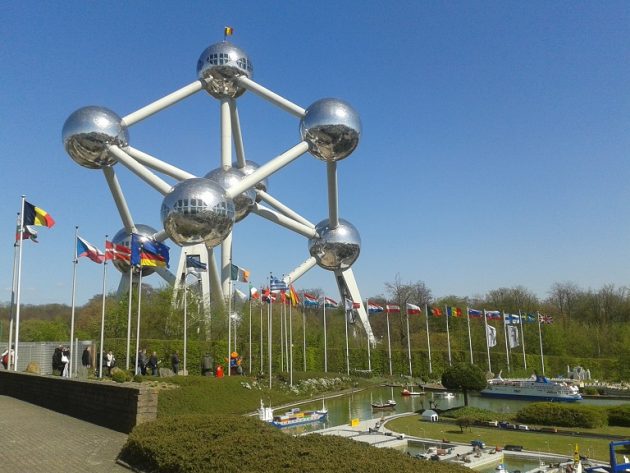 The Atomium, one of the symbols of Brussels. View from the Mini-Europe, a miniature park, showing famous European monuments on a scale 1 to 25. Photo by Tatyana Bajenova

In the recent article Rescaling expertise in EU policy-making: European think tanks and their reliance on symbolic, political and network capital (Bajenova 2019) that appeared in the Globalisation, Societies and Education Journal, Tatyana Bajenova has examined the strategies which think tanks (TTs) employ to influence EU decision-making. Unlike some recent studies of European TTs, this paper analyses both Brussels-based and member-state TTs through the examples of the symbolic value of the ‘TT’ label, their ‘expert’ role, as well as their locational and networking strategies.

The Label Which Speaks for Itself

The ‘TT’ label itself possesses symbolic capital which is related to three dimensions of their public image. The first is the ‘TT’ generic name, which attaches to the organisations, using it in their self-description or associated with it in the public discourse. It helps to explain their mission abroad: in positioning themselves in transnational TT networks or international TT rankings. The second dimension is the function of research, which is one of the elements of their academic capital. TTs regardless their particular organisational structure or legal form are seen as groups of experts that produce ideas and recommendations for policy-makers. This ‘scientific’ approach differentiates them from lobby groups or NGOs aiming to influence policy decisions which promote values or special interests.

The third dimension consists in their simultaneous location in different social fields involving use of academic, publicity and political forms of capital, which distinguishes them from other types of knowledge providers. As distinct from universities, TT is perceived as a research group, engaged in networking with policy-makers and popularising their research among general public and the media. Although this activity is quite similar to advocacy, TTs successfully elude to be seen as ‘lobbyists’.

The Expertise which Meets the Selection Criteria

TTs provide expertise to the EU institutions on both ad hoc and contractual basis. Regardless the character of cooperation providers of expertise should meet certain criteria of credibility. Although TT credibility can be strengthened thanks to the quality of their research products, the academic background of their researchers, the soundness of their research methodology, and reputation in the academic realm, many TTs claim a higher level of policy-relevance of their research products in comparison to those produced in universities. However, the representatives of the EU institutions consider that universities can also produce policy relevant research without pursuing a particular policy agenda, while underscoring well-timeliness and practicality of TT reports and frequent exchange of research staff between TTs and universities.

Nevertheless, the quality of expertise for EU institutions assumes not only the quality of research team and research capabilities of its providers, but also their understanding of the EU policy-making process. This leads to increasing collaboration between the two types of organisation which aim to make use of their complementary skills, often encouraged by EU evaluation criteria that require academic excellence, policy impact and public outreach. At the same time, independence valued by TTs as guarantee of their credibility and public legitimacy is often sceptically perceived by EU officials, who consider transparency of TTs, which obviously have some kind of affiliation and certain sources of funding, a more important credibility factor in the selection of expertise providers.

Location in Brussels: to be, or not to be?

A physical presence in Brussels increases the visibility of Euro-oriented TTs and their access to EU policy-making. A Brussels location allows TTs to facilitate their collaboration with both EU and national officials through effective networking at various events. The leading positions of Brussels-based TTs in different lobbying channels prove successfulness of this strategy in approaching EU institutions.

However, the EU decision-making system offers national TTs opportunities for different locational strategies. TTs which are located outside Brussels try to achieve influence at a distance through occasional visits and e-mail contacts. In certain policy areas European policy can be shaped through influencing member-states rather than EU institutions. With increasing movement of the EU policy space online a strong social media presence can be also seen as an alternative strategy for those located in national capitals. Although high social media visibility gives more access to decision-makers, maintaining personal contacts with current or former EU officials is regarded as the most important element of political capital by European TTs regardless of their ‘presence’ strategies. A location in Brussels and European policy experience of their partners provide TTs with ‘insider’ status in the EU policy space.

The Multiplier Effect of Networks

The strategy of joining TT networks is widely employed by European TTs and is encouraged by the EU institutions. These networks involving both Brussels-based and national TTs can raise the research ‘quality’ in large comparative studies at EU level, adding both European and national perspectives in the policy recommendations for EU policy-makers. TT networks with their numerous members, including from new member states, can potentially deal with the exclusivity of the EU consultation process. Network coordinators frequently established in Brussels can facilitate dialogue between network members and EU institutions, undertaking for the administrative component of this cooperation. Networks also help to disseminate widely research through joint publications and events, using communication channels of both networks and their members.

The official EU documents regard the European NGO networks as furthering European integration and global integration of the EU. Considering these perceived benefits of European networks, the EU fund many of them through competition-based projects and institutional grants. This seeming mutually beneficial cooperation is however subject to the challenges of internal and external exclusivity where ‘weaker’ network members, seen as “amateurs’ in the EU policy space can be content with their ‘dormant’ role, while the most visible ‘insider’ Brussels-based network coordinators and the EU institutions seeking to reinforce their political legitimacy profit by the social capital accumulated due to the formal network representativeness.

Overall, this paper determines the EU-specific features of TTs as boundary organisations showing how they strategically use different forms of capital accumulated at European level to increase their legitimacy, credibility, visibility and influence in the Brussels policy-making scene.

Dr. Tatyana Bajenova (https://www.researchgate.net/profile/Tatyana_Bajenova) is Lecturer at the Westminster International University in Tashkent. She was previously Marie Curie Fellow in the EU-funded project Universities in the Knowledge Economy (UNIKE). She holds a Doctoral Degree in Political Sciences from the Ecole Normale Supérieure de Lyon (France), a Master’s Degree in Law and Management from the Jean Moulin Lyon 3 University (France) and a Master’s Degree “The EU and Central Asia in the International System” from the Institut für Europäische Politik and the Centre international de formation européenne, Berlin (Germany).