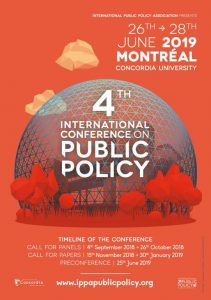 The fourth edition of the International Conference on Public Policy (ICPP) took place 26-28 June 2019, in Montreal (Canada), on the premises of the University of Concordia (following the 1st ICPP in Grenoble in 2013, the 2nd ICPP in Milan in 2015, and the 3rd ICPP in Singapore in 2017). The conference  included more than 150 thematic panels organized into 22 larger thematic groups, covering conceptual themes related to e.g. policy process theories, governance, comparative policy analysis, implementation, policy design etc., as well as sessions dedicated to specific policy domains (e.g. health and environment).

Apart from this, two roundtables and one keynote speech were organised. The opening roundtable focused on populism, right-wing parties and immigration policy in North America and Europe, while the topic of the closing one was governing in turbulent times, in particular in relation to how public policy can address the “climate disorder”. On the second day of the conference, Frank Baumgartner gave a keynote speech on the infrastructures necessary for comparative policy analysis, in particular highlighting the Comparative Agendas Project. The conference was preceded by a set of courses focusing on various theoretical and methodological approaches.

When it comes to higher education, research and innovation, there were three interesting panels with active participation of members from the ECPR Standing Group Knowledge Politics and Policies. First, “Knowledge Policy Dynamics in the Global Context”, comprising two sessions, included papers on role of consultants in academia, politics of higher education in general and internationalization in particular, governance capacity of stakeholder organizations, pull and push factors of academic mobility, Bologna Process through international regimes lens, and institutionalization of applied research. Second, the “Bridging Science and Diplomacy in Global Policy Making” panel, comprising three sessions, focused on comparisons between EU, US, China and former USSR scientific diplomacy, discussions on differences and similarities between cultural and education diplomacy, use of science diplomacy on broader diplomatic efforts, and exploring tools of science diplomacy (including branding). Finally, the third panel focused on theorizing internationalization of higher education from a policy perspective.

At present, it is not yet clear where the fifth ICPP conference will take place in 2021. In the meantime, the International Public Policy Association (IPPA) will be organizing a number of events, including several public policy schools.