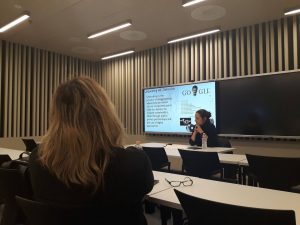 In the beginning of May 2019, Mariya Ivancheva – a Lecturer in Higher Education Studies at the University of Liverpool – was invited at Central European University   to give a talk on unbundling: a topic, which gained greater traction in higher education provision, research and policy. Previous to working on this subject Mariya Ivancheva did research on topics such as the Bolivarian higher education reform in Venezuela (her PhD dissertation research which she carried out at CEU 2007-2013), the casualisation of labour in the post-2008 university sector in Ireland (as a postdoctoral fellow at UCD 2014-2017). In 2017-2018 as a postdoctoral fellow at Leeds/UCT within the Unbundled University project, she studied the impact of digital technologies on academic inequalities in South Africa and the UK. Based on the South African part of this fieldwork, Mariya’s talk at CEU was titled “Conflicting Logics of Unbundled Higher Education”. The project explored the impact of the disaggregation of higher education provision into smaller units (short courses, MOOCs, and online postgraduate degrees) and partnering with private Online Program Management companies (OPMs) to offer online education alternatives.

In a 2018 paper (Swinnerton et al., 2018), Maryia and her co-authors argue that as higher education undergoes a massive expansion in demand globally, and experiences financial pressures exacerbated by the global financial crisis of 2008, the sector is at a decisive moment of rethinking the core mission of the public university. Market pressures on the sector encourage the search for additional income and new forms of provision, and private providers are increasingly entering the sector. At the same time, the HE sector has seen the appearance of many flexible online courses and qualifications, delivered by new configurations of providers and partnerships, including by parties new to the sector, through a process of disaggregating educational provision into its component parts, or ‘unbundling’. Whilst these changes may offer opportunities for increased numbers of learners to access education and thus contribute to economic prosperity, there is very little empirical research about the nature, process and impact of this unbundling and re-bundling of educational provision, as it is playing out in this rapidly reconfiguring space.

Maryia was invited for a talk on a topic highly debated in research and policy: unbundling of higher education programs. Mariya’s presentation, which focused on the unbundling of university programs, was set against a negative background of the development of the sector. In the paper she presented, the recent rise of MOOCs and online degrees offered via online platforms was seen not as occurring in a neutral environment, but rather vis-à-vis a climate of austerity for public higher education. In this, the comparison within the Unbundled University project has shown public universities in the Global North and South face similar challenges to expand their educational reach, while advancing their brand in international rankings and raising fees and third-stream income in order to secure additional revenue.

In her talk Maryia outlined further negative developments in the field. Both in the UK and in South Africa, online forms of unbundled provision offering smaller curricular units at lower prices have promised to disrupt this system by enabling learning flexibility and access to people everywhere in the world. Yet, based on interviews with university leaders, academics, and students and senior managers at private Online Progra Management providers (OPMs), the members of the Unbundled University team inquired if these forms of provision manage to challenge existing hierarchies of value in higher education and the dominant market logic that puts pressure on higher education and public institutions at large in the neoliberal era. Their research shows that relationships between universities and private companies threaten to reinforce existing inequalities, insofar private companies partner almost exclusively with historically advantaged, research intensive universities, with high international ranking and reputation. Thus, such partnerships do not disrupt an unequal terrain, but rather reflect the power asymmetries already at play.

Logic of capital vs logic of social pertinence

Based on fieldwork in South Africa in 2017 including over thirty in-depth qualitative interviews, Mariya et al.’s upcoming paper explores in further depth the perceptions of higher education university leaders and of senior managers of online program management companies. Analyzing their considerations and decisions around unbundled provision, the authors discuss two conflicting logics of higher education that actors in structurally different positions and in historically divergent institutions use to justify their involvement in public-private partnerships. These two logics are the logic of capital that reinforces marketization of higher education while preserving the dominance of exclusive high-ranked universities in the sector, and the logic of social pertinence, which promises widening participation and embedding higher education in its context of production and social reproduction. While they currently coexist, the paper argues they are in a constant friction and possibly conflict. Which way unbundled provision will be regulated in South Africa and elsewhere will determine the future of online higher education.

The post lecture discussion focused on questions related to the demand and supply of OPMs, the impact this type of education has on students’ access and graduates’ employability in the South African context, and how this phenomenon affects the teaching profession.