InRoad is a coordination and policy support action project funded under Horizon 2020 that aims to support a better alignment of research policies in Europe and hence responds to the challenges described above. InRoad was launched in January 2017 and supports research infrastructure policy development and the exchange of good practices for national research infrastructures roadmap processes and evaluation procedures, in order to promote harmonisation and coordination of national procedures in Europe.

The InRoad project executed a first round of data collection through a broad online consultation addressing the actors responsible for the national roadmap process in all EU member states and associated countries represented in ESFRI. The consultation covered all aspects leading to national research infrastructures roadmaps. Twenty-two EU Member States and five Associated Countries responded to the consultation and the results confirmed the large diversity of practices and methodologies among countries in Europe. Some countries are very advanced in the process and have already conducted a series of research infrastructure roadmap exercise, while many others are only starting. Moreover, the purposes behind national roadmap processes also vary greatly across countries, ranging from identifying scientific gaps to providing a guide to funding decisions (see Graph 1 below). Nevertheless, the consultation also identified some areas of convergence, such as a shared interest in mutual learning and increased collaboration, as well as the importance of sound research infrastructure roadmap processes and evaluation methodologies in a national context. 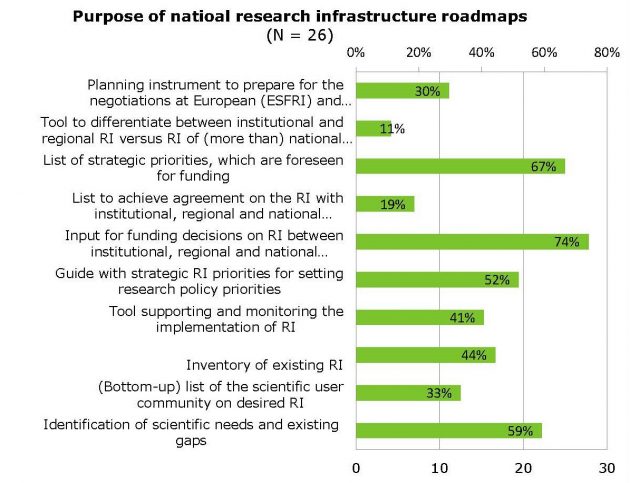 As a next step the InRoad project will execute more in-depth data collection through case studies on the national roadmap processes in specific countries. The following cases were selected: Sweden, Finland, the Netherlands and the Czech Republic. The aim of the case studies is to identify the factors of success in national research infrastructure roadmap processes and lessons to be learned in order to establish in ideal benchmark towards which national processes should converge.

The consultation and preliminary literature reviews showed that national decision-making on prioritizing and funding of research infrastructures is very complex, considering the multiple actors and levels involved. This is why the case studies aim first at a thick description of these roadmap processes in order to identify the relevant context. Based on the input of all the relevant actors, including the user community, funders, policy- and decision-makers, the benchmark shall be elaborated. In view of the aim of the InRoad project, an ideal process should allow for better coordination at European level.

The InRoad project has the opportunity to present and feed-in preliminary results at several upcoming events this year. The next possibility to meet and exchange with InRoad members will be during the Research Infrastructures Flagship Conference in Sofia (22-23 March), which is hosted by the Bulgarian Presidency of the Council of the EU. Related research will be presented by Isabel Bolliger at the ECPR General Conference 2018 in Hamburg (22-25 August) within the panel „Bringing the politics of international large-scale research into play“. Furthermore, the InRoad project looks forward to welcome interested audience to its sessions at the EuroScience Open Forum ESOF 2018 taking place in Toulouse during 9-14 July, as well as at the International Conference for Research Infrastructures (ICRI) 2018 in Vienna during 12-14 September.

Isabel K. Bolliger is a PhD researcher at the Swiss Graduate School for Public Administration (IDHEAP) at the University of Lausanne and interested in Science and technology studies and science communication. In her thesis, Isabel focuses on national decision-making processes for prioritizing and funding of large-scale research infrastructures. As a consortium member of the InRoad project she was responsible for the consultation and the design of the case studies.

Dr. Martin Müller is co-heading the Swiss Contact Office for Education, Research and Innovation (SwissCore) in Brussels and coordinating the InRoad project on behalf of the Swiss National Science Foundation. Martin has broad expertise on European research and innovation policy and chairs the Science Europe Working Group on FP9. He is very interested and committed to enhance the efficiency of European research and innovation policy and the interplay between national and European levels as well as between the different stakeholders involved. Martin holds a D.Sc. in biomedical engineering from ETH Zurich.

Alexandra Griffiths is currently a Master student at IDHEAP and Trainee for research at SwissCore, as well as Project Administrator for InRoad. As such, Alexandra is participating in the case study research within the InRoad project. Additionally, she is writing her Master thesis on research infrastructure roadmap processes, in relation to broader trends of science and research policy in Europe.