In the Europe of Knowledge, there are strong pressures on national governments to increase funding for research; one of Europe 2020’s headline indicators is to increase combined public and private investment in R&D to the equivalent of 3% of the GDP (see graph below). Beyond the amount of resources invested, it appears critical for both scholars and policymakers to question whether funding coming from different sources or taking different forms have a similar impact. 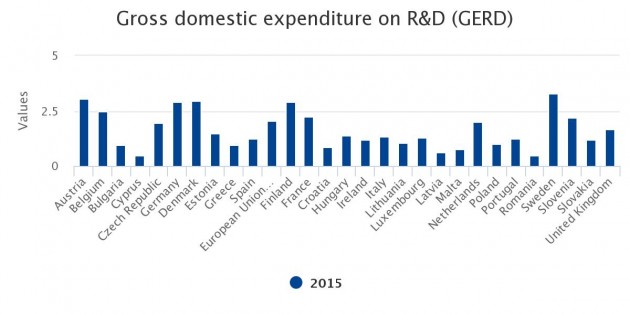 Progress towards investing 3% of GDP in research and development in EU member states. Source: European Commission

Focusing our analysis on four Nordic countries (Denmark, Finland, Norway and Sweden), public funding and research produced in academic settings, we have attempted to analyze the impact of four funding streams, according to the perspectives of actors located within different levels of the higher education systems. Complementing studies based on bibliometric data, our actor-centered approach aimed at grasping the multifaceted and complex phenomenon of research production in a holistic manner. Part of a lager study (see also Bégin-Caouette, 2016), our recent article ‘The perceived impact of research funding streams on the level of scientific knowledge production in the Nordic higher education systems’ published in Science and Public Policy (Bégin-Caouette, Kalpazidou Schmidt, and Field, 2017) relied on a MANOVA processed on 456 questionnaires and a thematic analysis processed on 56 interview transcripts to explore how actors perceived the impact of four funding streams, defined as the funding flows at the actor level including various instruments and consisting in an intermediary layer between public authorities and researchers (Lepori et al., 2007): block funding, competitive funding, excellence funding and strategic funding.

The quality, equity and efficiency of funding streams

Funding arrangements in Nordic countries have for long being characterized by a large block funding, and participants from all countries and at all levels confirmed it contributed to an equitable distribution of funding, and that equity was linked to the quality of the research produce since no funding body can know in advance where groundbreaking discoveries will occur (Öquist and Benner, 2012). Block funding based on performance measures would also increase research production in an efficient way since the small premium would create a signaling effect and generate symbolic capital for high achievers (Bloch and Schneider, 2016).

The competitive stream was perceived positively across countries because it enhanced quality research in an equitable manner since researchers from all institutions and disciplines could apply. It was however also perceived as being increasingly inefficient because of the diminishing acceptance rates, the correlated ‘Matthew Effect’ (Langfeldt et al., 2013) and the burden of writing multiple applications (von Hippel and von Hippel, 2015). Participants made similar comments regarding an excellence stream, which, despite concerns over equity and efficiency, would enhance the quality of the research production by being more stable, facilitating further grant applications (Bloch and Schneider, 2016) and fostering a critical mass of researchers (Bloch and Sorensen, 2015). Whether commenting on the block, competitive or excellence streams, participants made an association between an equitable allocation of resources and efficiency in research production. Strategic funding, although at the core of multiple recent policy initiatives, was still perceived at the periphery of traditional academic research systems, becoming a niche for emerging areas with less academic prestige (Benner and Sörlin, 2007).

Differences between the four Nordic countries

The MANOVA comparing survey scores by countries revealed some small but significant differences. Finnish participants attributed less importance to block funding than their Danish and Swedish counterparts. Swedish participants, for their part, attributed less importance to excellence funding than their Finnish and Norwegian counterparts. Like previously noted by Öquist and Benner (2012), Swedish participants considered research funding as being decentralized, complex and contradictory. In Denmark, actors attributed significantly higher scores to the block stream, which does represent a higher percentage of their country’s HERD than in other countries. Our thematic analysis is consistent with Välimaa’s (2005) observation that Danish policymakers were more concerned about supporting basic research than innovation, and with Öquist and Benner’s (2012) remark that the Danish National Research Foundation had channeled a massive increase of funding into the excellence streams, thus contributing to the increase in publications and citations.

In Norway, the excellence stream mitigated the negative impact of a scattered competitive stream by stabilizing the research system, fostering strong interdisciplinary centers and allowing promising scholars to attract sufficient funding for path-breaking discoveries (Asknes et al., 2012). It is finally interesting to note that, although the strategic stream is particularly important in Finland and could accelerate the innovation process, participants did not think it had a strong positive impact on the level of academic research produced.

This study provides concrete example of how different funding arrangements intertwine with existing academic traditions and are interpreted differently by actors located in different contexts. Streams’ adequacy to countries’ culture, history, national environment, industrial R&D and military development could have as much impact as the amount of funding or the specificities of the instrument developed. Despite shortcomings regarding national nuances and differences in actors’ perceptions, our article suggests that funding streams are perceived to have the most impact when they are consistent with academic traditions and the norms regarding an open, equitable and meritocratic competition between scholars.

Olivier Bégin-Caouette, former Canada-Vanier Scholar, is a postdoctoral research at the Inter-University Center for Research on Science and Technology (CIRST), based at the Université du Québec à Montréal (UQÀM). He also holds a PhD in higher education (comparative, international and development education) from at the Ontario Institute for Studies in Education (OISE) at the University of Toronto. His research focuses on interactions between political-economic structures and academic research production. He also held the position of visiting scholar at HEGOM (University of Helsinki) and the Danish Centre for Studies on Research and Research Policy (Aarhus University).

Evanthia Kalpazidou Schmidt is an associate professor and research director at the Department of Political Science, Aarhus University, Denmark. Kalpazidou Schmidt´s research interests include European science policy and evaluation, science and society studies, higher education studies, and gender equality in science. She has been involved in a number of European Union funded projects and has frequently been engaged as expert in the evaluations of projects funded by the European Union.

Cynthia Field is a doctoral candidate in higher education at the Ontario Institute for Studies in Education (OISE), at the University of Toronto. Her research interests include institutional differentiation, academic drift, sessional faculty and the academic profession.

Bloch, C. and Schneider, J.W. (2016). ‘Performance-based funding models and researcher behavior: An analysis of the influence of the Norwegian Publication Indicator at the individual level’. Research Evaluation, 47(1): 1-13.

Evans, L. (2015) ‘What academics want from their professors: Findings from a study of professorial academic leadership in the UK’. In U. Teichler and W. Cummings (eds.), Forming, Recruiting and Managing the Academic Profession, pp. 51-78. Dodrecht, the Netherlands: Springer.