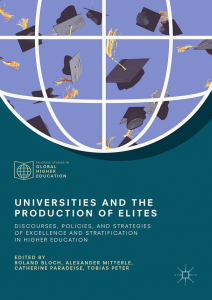 Universities have become central crossing points in modern society. They coproduce the narratives of our time, ranging from politics over neurogenetics to climate change. Universities educate students for diverse roles in society: nurses, musicians, lawyers, physicists, managers, neuroscientists, and philosophers have all been credentialized by higher education systems. In recent decades, there has been a consistent increase in the number of participants in higher education. The move from elite to mass education, has led to the emergence of an expansive, self-enforcing dynamic (Trow 2006).

Bringing the university back in

While acknowledging the important work that emphasizes the role of higher education in reproducing elites, our new book ‘Universities and the Production of Elites. Discourses, Policies, and Strategies of Excellence and Stratification in Higher Education’ (Bloch, Mitterle, Paradeise and Peter 2018) focusses on how universities as organizations produce elites.

As education provider and a research institution, the university “forms basic ideologies and creates academic degrees and expertise around these ideologies” (Baker 2014, p. 84). As a “sieve”, “incubator” or “hub” of society (Stevens et al. 2008), it both co-constructs and legitimizes “new classes of personnel with new types of authoritative knowledge” (Meyer 1977, p. 56). As an organization its forms of educational provision and its ties with the labour market are impacted by constant policy changes in the name of internationalization, excellence, New Public Management, quality improvement, efficiency and cost reduction (Paradeise and Thoenig 2015; Bloch and Mitterle 2017).

The aim of our book is to highlight the relationship between higher education institutions and the production of elites by focusing on how organizational change and increasing stratification in higher education impact on – or try to adjust to – the production of new elites for labor markets and academia. Its purpose is to provide new empirical and theoretical perspectives on this relationship and it focuses on the role of the university, rather than the labor market.

Discourses, policies, and strategies of excellence and stratification

The contributions originate from a small, intense workshop held at the Martin Luther University Halle-Wittenberg in September 2015. The workshop brought together scholars from Finland, France, Germany, Ireland, Poland, Portugal, Norway, the United Kingdom, and the United States to explore these issues. The endeavor is of course much greater than an edited book can handle. We see it as a starting point for a longer discussion. It thus provides relevant theoretical approaches that help to think the relationship anew, such as discourse analysis, new institutionalism, institutional habitus approaches, or visibility theory. The approaches are developed along concrete case studies in the respective countries on multiple levels along which this ordering takes place (such as programs, organizational units, universities, global business school fields, and nation states).

The book begins with addressing some of the discursive rationales that underlie recent policy changes toward increasing stratification in higher education and that emphasize individual actorhood, responsiveness, and competition. We then examine how governments take up these rationales – in response to massification and internationalization in higher education – when formulating policy changes. Examples from Finland, France, Germany, and Ireland describe how such policy changes impact on and reshape the structure of higher education systems. Policy devices that exemplify verticality in programs and institutions (such as rankings) are key to implementing and sustaining these changes in higher education. We show how policy devices – as objective status distributors – make hierarchies visible along specific indicators and how such devices impact on universities. Universities respond to these policy changes by adjusting to status demands. Common indicators play an important role in comparative positioning but local organizational arrangements are very heterogeneous. With regard to educational pathways, we draw on case studies from China, the United States, and Germany (business education and doctoral programs) to show how universities and their schools seek to employ international faculty, visualize elite architectures, or build privileged pathways to job positions. Finally, we discuss the role of specific logics of elite production. Examples from the United States and France each show that even if internationalization strategies are in place and although universities are global institutions, they still largely follow national production logics in the way that they educate and socialize their students.

Connecting the various empirical studies in this book opens up a new perspective for future research on the nexus between higher education and labor markets. The vertical differences and the way that they rebuild higher education matter, and they matter particularly for educational pathways leading to high-status positions.

Roland Bloch is a research associate at the Institute of Sociology and the Center for School and Educational Research at Martin Luther University Halle-Wittenberg. He received his PhD at University of Leipzig with a dissertation on the study reforms in the course of the Bologna process and has worked on the structure of academic work at German universities. His latest research concerns stratifications in higher education, especially doctoral education.

Alexander Mitterle is a research associate at the Institute for Sociology and the Center for School and Educational Research at Martin-Luther-University. His recent research focuses on the development of stratification in German higher education. He has worked and published on various aspects of higher education including internationalization, private higher education, teaching structure and time as well as real-socialist higher education.