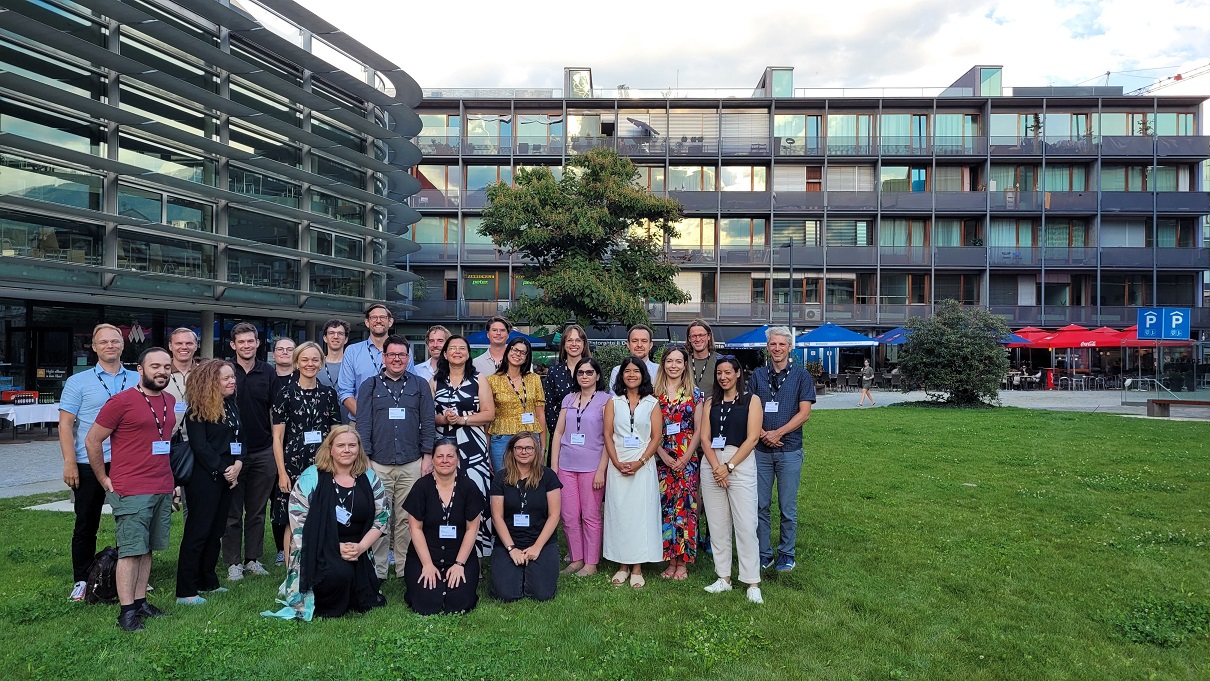 It was particular joy to meet again in person at the General Conference of the European Consortium of Politics Research (ECPR) last week 22-26 August. After two years of virtual conferences due to Covid, this time the ECPR General Conference took place in the beautiful city of Innsbruck in the Austrian Alps. It brought together more than 1500 participants in more than 500 panels as well as roundtables on some of the troubling current topics such as the war in Ukraine and equality, diversity and inclusion policies.

This was the 11th time that a section dedicated to knowledge politics and policies was organized at this conference. The section endorsed by the ECPR Standing Group on Knowledge Politics and Policies included eight panels on topics such as knowledge governance, higher education and research policies, scientific advice and politics of Artificial Intelligence. We were happy to see good attendance and engagement at our panels. Below are insights in some of the panels, provided by the panel chairs.

The Panel on the Rise of Neonationalism and its Impact on European Higher Education explored the different ways in which rising new nationalisms in Europe are affecting higher education policy. Papers highlighted different domains around which higher education and nationalisms interact including challenges to institutional autonomy, academic freedom, minority language rights and international education policy efforts. Katja Brøgger introduced the panel by outlining the complex zones of contestations between universities, the state and international polities such as the EU and considering implications for the university. Neema Noori and Mikhail Beznosov presented their paper (co-authored with Artem Lytovchenko) on the distinct trajectories of post-soviet language policies in higher education in Uzbekistan and Ukraine, against the backdrop of competing nationalisms and minority language policy. Rasmus Harsbo then presented his work on the relations between the state and the university in Poland, underlining how recent changes are characterized by political efforts towards counter-elite populism. Next, Ester Zangrandi presented her study on France, outlining the different ways recent higher education policies and political discourse are affecting the freedom of academics and the autonomy of their institutions. Finally, Hannah Moscovitz presented her study on the government rationales behind education nation branding in the UK and Scotland, highlighting implications for how economy and nationalism intersect in multinational states.

The panel Scientific and Technical Advice for Global Governance (re)considered characteristics of knowledge-policy interfaces in global environmental governance and explored struggles in such interfaces. The first paper “Intergovernmental Expert Organizations as Pre-Negotiation sites: The Case of the IPCC” by Kari de Pryck (University of Geneva) looked at the construction of controversial tables and boxes in the approval of the Summary for Policymakers (SPM) of the IPCC. The second paper “The Role of Expertise in Shaping Politics of Nuclear Knowledge: A Case Study of Think Tanks” by Marzhan Nurzhan (University of Basel) proposed a comparative study to research the role of expertise on nuclear knowledge production. The third paper “Savant, Nomadic and Rooted Experts: A Career Typology of the United Nations’ Environmental Programme (UNEP) Professionals” by Krystel Wanneau (University of Vienna) analyzed the career and networks experts in UNEP. The final paper “Pathways of Scientific Input into Intergovernmental Negotiations for a new Agreement on Marine Biodiversity” by Ina Tessnow-von Wysocki and Alice Vadrot (University of Vienna) researched the ways in which science feeds the negotiations for a new treaty to conserve and sustainably use marine biodiversity in the high seas.

The panel Issues in national and transnational knowledge governance feature five papers. Adrienn Nyircsak presented her study on universities as epistemic actors in transnational policy learning. Focusing on European Standards and Guidelines for Quality Assurance (QA) in Higher Education as a case, and using the practice perspective, the study compares three peer learning activities. The findings suggest that the institutional set up of these activities is the key condition for facilitating (or impeding) peer learning, that direct interaction between governance levels is relatively limited, as well as that each activity has “blind spots” reflecting the composition of participants and the epistemic positions of hosts. This was followed by Marco Cavallaro’s study concerning competition in EU framework programmes (co-authored with Peter Edlund and Benedetto Lepori). The analysis specifically compares the individual curiosity driven bottom up ERC grants and consortia-led top-down Societal Challenges grants. While preliminary analysis shows that both types are constructed and perceived as scarce and desirable, there are also important differences related to the openness of topics, actors involved in competition, understanding of excellence and selection and profile of evaluators. EU research funding programmes were also in the focus of the third paper presented by Tatyana Bayenova, though in this case from a science diplomacy point of view. The study focuses on the tensions in the relationship between, on the one side, the EU and, on the other side, the UK and Switzerland, historically rather successful in attracting EU research funding. Two inter-related aspects of science diplomacy emerge: how both sides engage in diplomacy for science, as well as how, in particular when the overall relationship is contentious, scientific cooperation is used for diplomacy.

Relationship between interest intermediation at national and European level was the focus of the fourth paper by Martina Vukasovic, who analyses homogeneity / heterogeneity of organizational attributes of national level interest groups. Using the case of national unions of students, the analysis postulates policy positions as key organizational outputs and explores the extent to which similarity of issues the unions focus on and their preferences concerning these issues can be explained by isomorphic pressures stemming from structuration of national and European level policy arenas. The fifth study presented by Mari Elken zeroed in on collaborative governance processes, specifically analysing the case of multi-annual performance agreements introduced in Norway in 2016. Conditions such as the high level of trust between the actors involved, recognition of existing power, knowledge and resource asymmetries, framing of the process as open and inclusive, ambiguous and shifting purpose of the agreements, as well as implied linkage to funding are identified as crucial for the process. Moreover, the analysis highlights how aforementioned conditions, in interaction with concurrent reforms in Norwegian higher education, contributed to a rather varied set of approaches to developing and implementing performance agreements.

The panel International policy dynamics and national filters – The global politics of higher education and research policies chaired by Jens Jungblut (University of Oslo) discussed the interplay between global dynamics and national policymaking with regard to higher education and research policies. Using a variety of empirical contexts, each presentation unpacked the complexities of policymaking in the knowledge policy domain. In the first presentation Elisabeth Lackner (University of Oslo) presented a study investigating the influence of organized interest on a White Paper regarding quality assurance in Norwegian higher education. Her study highlighted how different groups of actors where more or less successful in imprinting their preference into the new policy. The second presentation by Erlend Langørgen (University of Oslo) presented results of an exploratory study focusing on partisan politics with regard to research policy in Western Europe. With the help of election manifesto data, the study shows that there are partisan differences regarding research policy and that parties also assign differing levels of salience to this policy field.

The third presenter, Andrew Gunn (University of Manchester) presented a conceptual paper that combined several classical approaches from political science to disintegrate diffusions processes in higher education policy. His presentation highlighted the ongoing tension between global homogenization and national differentiation in this policy field using different conceptual approaches to explain why this tension persists. The fourth presentation by Anna Prisca Lohse (Hertie School) focused on the effect that Brexit and Covid19 had on English, German, and French student mobility policies. Using a mixture of historical and sociological institutionalist approaches, the paper highlights that both crises are created different types of policy responses in the different countries leading to a complex interaction between different institutional pillars. In the final presentation, Alina Felder (University of St. Gallen) presented a study of the European University Initiative using it as an example for projectified policymaking by the European Union. Using interview data, the analysis put a special emphasis on the role of the Covid19 crisis for fostering this type of policymaking approach and discussed the effectiveness that it can have in the long-term.

This was the third year that the section included a panel on Power, Politics and Policy of Artificial Intelligence. Some of the research presented in previous editions of this panel has already been published, while much more is under preparation. This year the panel discussed four contributions based on work in progress. Inga Ulnicane and Tero Erkkilä presented an emerging research agenda on politics and policy of Artificial Intelligence (AI) focusing on questions such as distribution of power and the role of ideas in AI politics. Regine Paul discussed insights from her very interesting research on risk-based AI regulation in the European Union (EU) competition state. Andreas Öjehag-Pettersson and Malin Rönnblom (drawing on work co-authored with Vanja Carlsson) shared their conceptual framework and plans to undertake empirical research to study implementation of AI in the Swedish public sector. Finally, Justinas Lingevicius gave an overview of the results of his research on framing military AI in the EU strategic discourse. 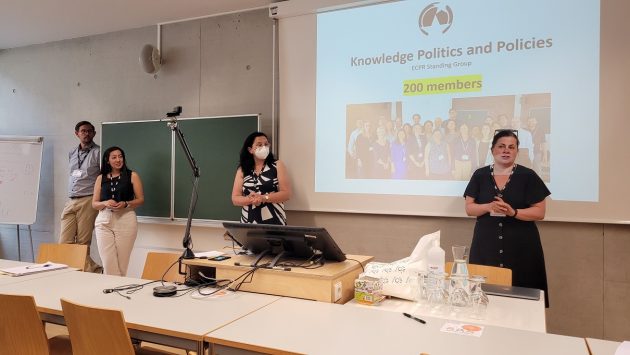 During the conference, we also held our traditional Standing Group meeting to discuss our activities such as the next edition of excellent paper award from an emerging scholar, our Europe of Knowledge blog, and future conference panels. If you are interested in our work, please join our Standing Group Knowledge Politics and Policies. We are already starting to prepare for our section at the next ECPR General Conference in Prague, 4-8 September 2023. See you there!