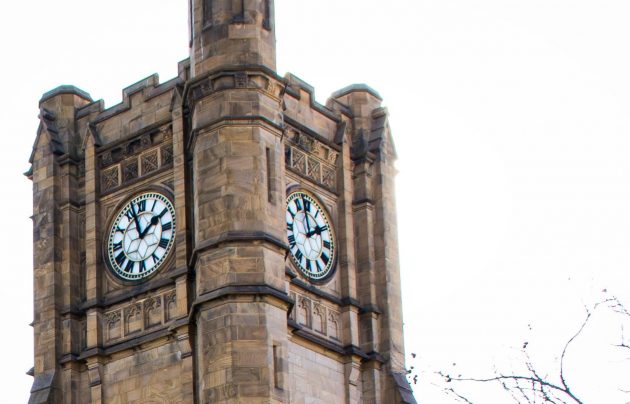 Photo of the University of Melbourne by Kon Karampelas on Unsplash [https://unsplash.com/photos/tqixYTzO_Ug]

Working in academia comes with adapting to different timeframes: some universities use semesters, others quarters or terms. A course at a German university can be timed in semester weekly hours (SWS) or in credit points. In both cases they differ – with a usual time-span of 45 minutes – from the U.S. equivalent: the credit hour, which lasts 60 minutes. As academics we rarely ponder over the question why a timeframe here is different from elsewhere. We accept different academic timeframes as idiosyncratically institutionalized.

We do this in an institution that in the last decades has been increasingly attributed with organizational agency (Meier and Krücken 2006; Ramirez 2006): universities define goals, aspirations and missions, and plot their way to student numbers, third party funding, re-accreditations, or even world class. As Philipp Altbach (2003) put it, the two basic credentials to successful university building are time and money.

The strategic, linear idea of time in such managerial perspectives sets aside the university as an institution and treats it as a projectable body. A body that flourishes precisely because it sets aside the heterogenic forms of time within and outside the university. Time is a proxy for ceteris paribus: given sufficient money, and no invading French revolutionary troops (University of Cologne), or a Soviet protectorate (The University of Prussian Enlightment, Koenigsberg), universities can become great in time.

After all it is not only the organization that strategizes time: modern higher education is itself first and foremost a time project. Academic timeframes induce social values, professional norms, and symbolic meaning, and they rationalize merit-based inequality (Becker 1964; Luhmann 1998; Meyer 1977). Educational timeframes are the building block for career success, and the way they are structured is recursively formed through their environment. Universities as institutions have their own time(s).

What I try to trace in “Time, the university, and stratification” (Mitterle 2021) is thus where these various institutionalized timeframes come from and how they correspond with distinct strategies of educational or/and organizational progression and positioning practices. I understand time not as a detached and neutral form of measurement but as a specific duration associated with a specific place and regulation (cf Latour 1987; Massey 1999). I am thus interested in the history and politics of academic time.

Starting in the middle ages, the paper traces how semesters, terms, and later quarters became institutionalized, how they corresponded with church, government, or market policies, and how they became more and more fine-grained as productive strategic resources in the organization of the university. Covering Germany, the U.S., and the UK, the study overextends what can be done in a chapter. And as research on the institutionalization of academic timeframes is scarce and scattered, the study is explorative in nature. Yet, it is possible to carve out five phases in the institutionalization and strategizing of academic time that correspond with changes in the social role of universities: the Sequencing (1), Habitualizing (2), Disciplining (3), Organizing (4), and Optimizing (5) academic time.

Sequencing time traces the medieval roots of terms and semesters, how religious and scholarly rhythms and practices structured the academic year in medieval universities. Next to feast days, the reading of a canon of books and the accommodation of extra canonical works structured the studium generale. In reaction to enrollment peaks that corresponded with harvesting and sowing periods, and the office periods of deans and rectors, partitions became habitualized as semesters and terms. On the European continent, and especially in the German-speaking territories, they were increasingly enforced for advertising the university as part of territorial states in course catalogues. In light of a mercantilist state competition and an over-regulation and observation of the Policey-state the often over-expansive individual timeframes of academic lectures were aligned to semester-time periods. Later nation states disciplined academic timeframes to allow for synchronized mobility between universities at defined times during the academic year.

With the growing importance of the research University for Professional Careers during the 19th century the need to structure and organize higher education increased. In the late 19th century the University of Chicago invented the quarter. It was used to re-organize the learning pace of students in order to improve their abilities but also to achieve competitive advantages compared to established U.S. universities. Such university-led organizing endeavors were matched by a wider development that aimed at organizing higher education as a layered system and which established comparable time categories of progression. While in Europe a stronger bureaucratization of degree programs was initiated by the states, in the U.S. the prospect of Carnegie financed pension funds established a hierarchy between high schools and colleges that also led to a stronger standardization of academic time. What in Germany was called semester weekly hours to describe recurring time frames, the U.S. introduced as (semester/quarterly) credit hours. The broad timescales of semester, quarter, and term became dissected into smaller time units that allowed to accommodate the growing differentiation among degree programs, anticipate student/teacher workload as well as academic progression and mobility. It thereby improved management efficiency.

In the 1980s European higher education institutions were increasingly framed as acting entities. What had been the case for U.S. Universities since the late 18th century and what manifested the co-existence of a wide range of timescales in the U.S., now increasingly took hold of European universities. The discourse shifted from improving higher education systems as a whole to fostering differentiation and the competitiveness of individual institutions. Management reforms first allowed and later forced universities to implement modular credit point systems. These provided more leeway regarding the timescales universities used. While the old timescales and -frames predominantly organized time within the university, credit points homogenized and totalized all student workload. Rather than just visualizing student progression it now could be optimized: courses could be accelerated, or shortened and content intensified. In favor of optimizing in-program student progression, the paces of universities diverged and de-synchronized. While in Germany this differentiation took place along private/public lines, U.K. universities diverged in their starting dates, timeframes and –scales (See Fig 1).  The possibility to move between timeframes during an academic year decreased. 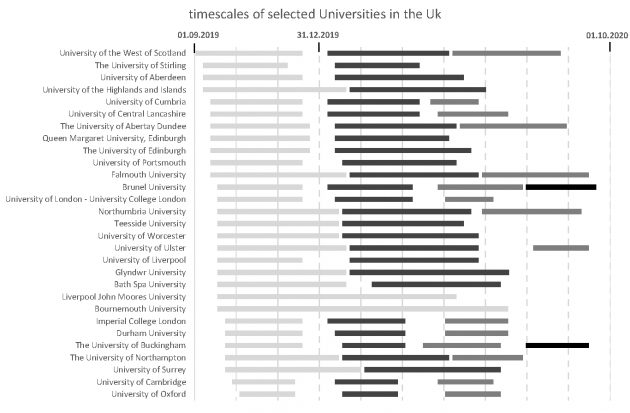 Ironically, at the same time in which the fine-grained timescales and time-paces diverged, time-frames became more similar. The global diffusion of modular credit point systems was accompanied by the semester as the operating time container of these new time systems.

Academic institutional time “effectively compel[s] us to live in multiple periods at once” (Levine 2015: 60). There are only few institutions in the world that have built and maintained their own timescales throughout centuries. We encounter an array of timeframes in universities today. These have been established, structured, and strategized very differently across the centuries – from within and outside the university. The various phases overlap and start again but they seem to follow a teleological progression that increasingly makes it possible to use ever more granular time-frames as strategic resources. While the German universities very early and rigidly adhered to the semester timeframe, U.S. universities were the first to strategize different timeframes for competitive reasons, and U.K. universities then were the first among the three to implement totalizing modular time systems that induced wide differentiation among degree programs. A de-politicized time-projection indeed allows to frame strategy as if the university (and its goals) was immutable within time, but a close look shows that the university evolves strategically through academic time. Multiple timeframes co-exist and organize everyday academic life. These are increasingly part of political and strategic progression.

Alexander Mitterle is research associate at the Center for School and Educational Research and the Institute for Sociology at the Martin-Luther-University Halle-Wittenberg (Germany). His research explores the way in which (institutional) stratification unfolds in higher education in light of declining state regulation. This includes the historical formation of distinct organizational arrangements and their vertical effects, the interaction of sizing devices, the borderlands of admissions, intensifications of time and the idiosyncrasies of disciplines. He is currently working on a research project on the academization of work funded by the Federal Ministry of Education and Research (BMBF). His most recent paper (together with Manfred Stock) “higher education expansion in Germany: between civil rights, state-organized entitlement system and academization” has just been published in the European Journal of Higher Education.

This blog post is based on the paper that won the 2020 Award for Excellent Paper from an Emerging Scholar from the ECPR Standing Group ‘Knowledge Politics and Policies’. The award is celebrated during the 2021 ECPR General Conference. This was the fifth time this prize was awarded. Previous winners are Justyna Bandola-Gill, Emma Sabzalieva, Olivier Provini and Que Anh Dang.

Mitterle, A. (2021) Time, the University, and Stratification: The Historical Making of Institutional Time as a Strategic Resource In Vostal, F. (ed.) Inquiring into Academic Timescapes. Bingley: Emerald Publishing, pp. 213-231.

(In) voluntary mergers in higher education: a story from Norway | Towards resilient organizations and societies. A cross-sectoral and multidisciplinary perspective | B-STA-R: A new dataset to study science diplomacy and global science | Knowledge Politics and Policies @ ECPR 2021 General Conference | From semester to credit hour – the historic making of academic time as a strategic resource |