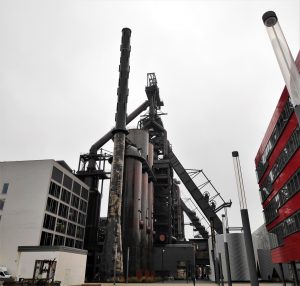 University of Luxembourg, Photo taken by Alina Felder during her fieldwork in 2019

European higher education institutions are receiving substantial attention in various areas of EU policy making. They are expected to foster excellence in research, mobility in education and cohesion through cross-border exchange. Yet, the interrelationship of these different governance sites for a Europe of Knowledge (Gornitzka 2010) appears under investigated. While higher education policy research scrutinizes the multi-level, multi-actor and multi-issue dimensions of governing the European Higher Education Area (Chou et al. 2017), research on European border regions is concerned with day-to-day cooperation practices in the so-called ‘laboratories’ of European integration (e.g. Lechevalier and Wielgohs 2013; Stokłosa 2015). Existing studies on such laboratories among higher education institutions remain at the respective cross-border cooperation level (e.g. Giband and Mary 2018).

Entering the laboratories of Europeanization in the area of higher education

In my work I depart from previous research by analyzing the relationship among higher education (policy) actors both at the level of cross-border cooperation and between the (sub)national and EU levels. Data was gathered through semi-structured interviews with cross-border cooperating higher education institution representatives at rector and administrative level, (sub)national political actors and higher education institution associations. The higher education (HE) institutions concerned by my research are those, which receive(d) funding through European Territorial Cooperation, better known as Interreg. Next to reasons of accessibility, the cases for comparative analysis were selected with different starting points in the support provided through EU funds. While the University of the Greater Region – involving six HE institutions from Belgium, Germany, France, and Luxemburg – was established due to Interreg funding in 2008, the International University of Lake Constance – a cooperation among 30 HE institutions from Austria, Germany, Liechtenstein and Switzerland – was already established in 1999, prior to receiving EU funding in 2009.

While in the first case, Interreg has favoured a cooperation, which would not have emerged otherwise, my analysis reveals that Europeanization also matters for the already existing cooperation structures and issues. If conceived of as an opportunity and resource, Interreg is thus used to establish new or facilitate existing cross-border cooperation. Analysing how Interreg affects the cross-border cooperation among higher education institutions, delivers insights into concrete Europeanization processes, i.e. ‘processes of a) construction, b) diffusion and c) institutionalisation of […] rules, procedures, policy paradigms, […] and shared beliefs and norms, which are […] consolidated in the EU policy process and then incorporated in the logic of domestic […] discourse, political structures and public policie’ (Radaelli 2004, p. 3).

While higher education institution members more clearly distinguished between academic and economic objectives of cross-border cooperation, political actors referred to these as strongly intertwined by mentioning objectives such as the development of skilled labour force to prevent brain drain. At the same time, certain higher education institution representatives explained how the cross-border cooperation of their institutions is not only supposed to contribute to a specific economic area but also to a space to live, to study and to conduct research. Concerning the academic objectives of cross-border cooperation, proximity was mentioned as an asset for joint research projects, even though research is highly internationalised. Joint course offers were an initial goal in the beginning of both cases. Yet, organisational, legal and practical obstacles concerning different schedules, degree requirements and language barriers were unfavourable to increasing the regional mobility of students and staff. The comparatively smaller size of the University of the Greater Region and, thus, stronger administrative support has allowed maintaining the existing and establishing new joint study programs.

In terms of financial drivers, higher education institution representatives relate to how cross-border cooperation is a means to increase access to national and/or EU funding, where pre-existing cooperation relationships are an asset to acquire funding. However, the administrative effort and high co-funding rates of EU funding weakens its role as a driver for cross-border cooperation. Finally, cultural and organisational differences appear as two sides of a coin in both cases, so that higher education institution representatives highlighted the benefits of learning from differences in the approaches to teaching, researching and providing students with advice on international and professional experiences.

This blog post is based on my paper published as part of the Eastern Journal of European Studies Special Issue ‘Cross border cooperation and peripheral areas in Europe’ edited by Tomás Lopes Cavalheiro Ponce Dentinho. Here you can access the article in full.

Alina Felder is a doctoral fellow at the Bamberg Graduate School of Social Sciences (BAGSS). In her PhD project she explores the under investigated cross-roads of EU regional policy with the area of higher education policy. The central question of her dissertation is how EU regional policy instruments influence the cross-border cooperation among higher education institutions and their attempts to shape EU knowledge policies. Her research interests thus include Europeanization processes that are induced through network modes of governance the EU is establishing and encouraging public and private actors to participate in. Next to her research, Alina regularly works in political education contexts.