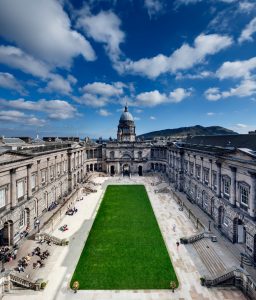 The quest for usable science is one of the defining challenges for contemporary universities. One of the key drivers of this change is the rise of the so-called impact agenda, in which research funding is directly linked to the socio-economic value of produced knowledge. This change in research funding – and the financial stakes involved in it – has had important consequences for the incentive systems of universities in the UK. One feature of this change is the upsurge in a new practice – termed in the British context ‘knowledge exchange’. In less than a decade, knowledge exchange has become a commonplace in UK universities – from a newly emerged category of professional services supporting these activities, through dedicated institutional formations, such as Knowledge Exchange and Impact Offices and strategies, and finally to the inclusion of impact in career progression criteria.

Yet, despite this expansion of the idea of knowledge exchange across university structures, the concept itself is often undefined and used vaguely. In the paper drawing on my doctoral work which was awarded the 2019 Excellent Paper Award, I addressed this topic by exploring knowledge exchange as a problem of practice: knowledge exchange seen from this perspective is not a set of universal strategies but rather a malleable phenomenon that changes its meaning in different contexts. Building on this insight I empirically explored the practice of knowledge exchange in two large initiatives funded by UK Research Councils – initiatives which, although located at universities, were charged predominantly with mobilising knowledge and working towards research impact. Through qualitative interviews and document analysis I aimed to answer the question: what meanings of knowledge exchange emerge in this context?

The key finding here was the fact that knowledge exchange is a multicultural practice which requires navigation, integration and translation between different paradigms of science. Academics who identified more strongly with traditional academic values (such as autonomy, impartiality and intellectually-driven inquiry) saw knowledge exchange as a knowledge-focused practice, the outcome of which could be a new policy framework (the ‘Challenge’ framing of knowledge exchange) or social learning of different actors in deliberative forums (the ‘Facilitation’ framing). Academics who saw themselves as ‘new’ scientists – sometimes referring directly to Mode-2 science – saw knowledge exchange as an engagement-based practice. They perceived knowledge exchange more instrumentally as an action-oriented and utilitarian practice, the effects of which were envisioned as concrete changes in policy. Here, for example, the academics referred to collaborative research (the ‘Co-production’ framing) or promotion of specific solutions (the ‘Advocacy’ framing). Knowledge exchange was therefore an area of intensive boundary work, where the spheres of science and policy were re-drawn across different value-laden lines.

Despite drawing on different academic traditions, these framings were malleable and the academics mixed-and-matched different strategies. The choices of strategy depended on multiple factors.

Politicisation of the problem

The choice of strategy was shaped by the level of politicisation of an issue. When dealing with contested issues (e.g. DNA testing, genetic databases, health inequalities), academics prioritised knowledge-based strategies (over the engagement-based ones). In particular, when faced with contentious issues, the academics opted for repertoires of knowledge exchange which were aligned more closely with the notions of impartial and autonomous science, as this was perceived to be more effective at broadening the debate.

The interviewees pointed out that some stages of policy development were more conducive to specific repertoires of knowledge exchange. In particular, the early stages of policy formulation were conducive to strategies aimed at expanding the scope of policy options. Nevertheless, the interviewees saw the biggest opportunity for contributing to evidence-informed policymaking at the level of implementation of policies, particularly at the local level. One of the reasons for this focus was a perception that it was easier to develop close relationships and trust between actors at the local level, thus enabling models of co-production based on engagement, such as learning facilitation and co-production models.

Changes in the research funding system

With the introduction of Research Excellence Framework (REF) in the UK, academics became incentivised to produce more traceable (and consequently auditable) forms of impact. The interviewed academics reported that, since the introduction of REF, they had seen the system of incentives evolve to support practices resulting in such impact; for example, Co-production or Advocacy (rather than the more conceptual and open-ended practices of Challenging and Facilitating).

Overall, my research points to the fact that ‘knowledge exchange’ is in fact an umbrella term, containing a broad – both epistemically and practically – variety and multiple types of interactions between various types of knowledge and their uses. Even though the importance of close relationships for knowledge exchange are central to the effectiveness of the initiatives, this research highlights that some forms of interactions – such as critical or advocacy action – in fact benefit from looser connections to policymakers, instead gaining legitimacy, credibility and usefulness from academic evidence. The four repertoires of knowledge exchange reinforce existing arguments on the variety of roles academics can employ in the policymaking process, ranging from a greater focus on the autonomy of researchers, to closer engagement with the policy process. The forms of engagement were shaped by the variety of contextual factors, supporting claims for the central role of context as both the determinant of knowledge exchange and the key element of the process of evidence uptake in policy.

Dr. Justyna Bandola-Gill is a Research Fellow in Social Policy at the School of Social and Political Science at the University of Edinburgh. Justyna works at the intersection of Science and Technology Studies and Public Policy. Her research explores the interactions between research and policy, especially the ways in which knowledge is organised, governed and mobilised across different settings in order to achieve political goals. Currently, Justyna is working on an ERC-funded project, METRO, exploring the global rise of metrological fields, where her research focuses on the rise of Sustainable Development Goals.

This blog post is based on the paper that won the 2019 Award for Excellent Paper from an Emerging Scholar from the ECPR Standing Group ‘Knowledge Politics and Policies’. The award was celebrated during the ECPR 2020 General Conference. This was the fourth time this prize was awarded. Previous winners are Emma Sabzalieva, Olivier Provini and Que Anh Dang.