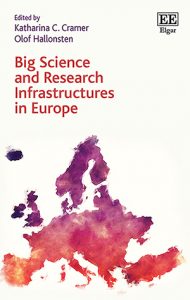 What are Research Infrastructures and what roles do they play in the European integration process? These and other questions are addressed in recently published book Big Science and Research Infrastructures in Europe, edited by Katharina Cramer and Olof Hallonsten. In this Q&A with Europe of Knowledge blog, they explain origins, key concepts and findings of this book.

Q3: The book demonstrates the roles that Big Science and Research Infrastructures have played in the European integration process during the second half of the 20th century. What is their role today when European integration faces challenges of Brexit and rise of nationalism?

With regard to Brexit, it probably is too early to assess and fully understand how this political turning point in the history of European integration might impact the establishment and operation of collaborative Big Science projects in Europe and the role of the United Kingdom within these efforts. But we know from the history of Big Science collaborations in Europe that the United Kingdom has always been a challenging but important partner. To the extent that controversy and disarray between the United Kingdom and other member countries emerged e.g. around the issues of financial contributions or site selection, in most cases, countries could find common ground to bring collaborative efforts on track. We can only speculate whether these historical patterns will also remain true for the future of European Big Science collaborations when the United Kingdom is no longer a member of the EU.

Q4: The book focuses on Europe. Can similar Big Science and Research Infrastructure initiatives be found in other parts of the world?

Yes and no. The United States or Japan are, for example, other major players in Big Science hosting, for instance, SLAC (Stanford Linear Accelerator Center) or KEK (High Energy Accelerator Research Organization) that are major facilities for particle physics research or APS (Advanced Photon Source) and SPRING-8 (Super Photon ring-8 GeV) that are major light sources for research with synchrotron radiation. The organization of e.g. APS or SPRING-8 can well be compared to that of their counterpart in Europe, ESRF (European Synchrotron Radiation Facility): All of these facilities are service facilities that offer brilliant light as an experimental resource to groups of researchers that come to the facilities on a short-term basis.

Q5: What is the impact of Covid-19 on Big Science and Research Infrastructures in Europe?

Political expectations on the performance of European Research Infrastructures in the current pandemic situation are high. But we should not forget that Research Infrastructures per se cannot provide answers to these questions. But most of the Research Infrastructures that we analyze in our book are service facilities that offer experimental opportunities to the scholarly community and teams of researchers come to the facility on a short-term basis to perform their experiments. The current pandemic situation critically impacts these usual working practices at these facilities through travel restrictions and requirements of physical distancing. We thus need to bear in mind that the processes of how science is done at these facilities are not only complex and time-consuming, but also extremely uncertain under the current pandemic condition.

Q6: What are the main lessons from your book for practitioners and policy-makers?

Q7: What would be interesting avenues for future research?

One important question certainly is to explore emerging new partners and members in European collaborative efforts beyond the Western European setting, such as Russia. A continued analysis of the seemingly ever-growing importance of Research Infrastructures in European (and EU) policymaking would also be useful, not least since the definitional work remains underdeveloped in policy circles. From a scholarly point of view at least, it remains unclear what “Research Infrastructure” really means and how the category can be demarcated. This, obviously, is a task for future research efforts to take on.

Katharina C. Cramer is a historian specialized in the history and politics of science and technology and the power of knowledge in the 20th and 21st centuries. She is author of A Political History of Big Science: The Other Europe (Palgrave, 2020).