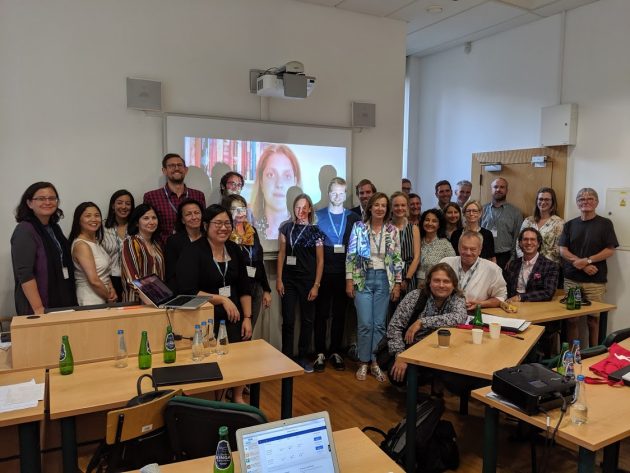 Nothing can keep a genuine community of scholars from academic discussions – neither a malfunctioning projector, nor a shortage of sockets, nor hard chairs from the Communist times. Even more so when discussions centre on the governance of knowledge as the key to economic growth and public well-being. This year’s Knowledge Politics and Policies section at the European Consortium for Political Research (ECPR) General Conference took place from 4-7 September in the city of Wrocław in Poland which, from a historical perspective, offered dramatic examples of the role of rulers, parties, political ideologies, international organisations, educational institutions, and civic movements in shaping the knowledge landscape.

Building on successes from similar sections in previous ECPR General Conferences, this year’s section organised by the ECPR Standing Group on Knowledge Politics and Policies included nine panels and some 40 papers spanning multiple issues such as politics of size in higher education, science diplomacy, Big Science and Research Infrastructures in the fields of higher education, research and innovation –  yet virtually all ran back to the original question of how we manage knowledge.

If we look up the verb ‘to manage’ in Oxford dictionaries, it appears to have two basic meanings. Firstly, to be in charge or control something, and secondly, to succeed in something despite difficult circumstances. The first meaning could further break down into:

Conversely, ‘difficult circumstances’ are likely to involve challenges associated with:

It is plain to see that the second sub-pool of meanings is almost a negative image of the first sub-pool. Bearing this in mind, let us count the ways of managing knowledge.

Studies in higher education, as a rule, exhibit little interest in longitudinal analysis that would go back centuries. However, not only this approach helps to highlight certain continuities and discontinuities in knowledge governance, it can even call into question the novelty of contemporary phenomena. This was vividly demonstrated by Gaële Goastellec (Université de Lausanne) who presented an overview of policies on university admissions in the medieval and modern times. As it happens, universities have been playing a role in social mobility, internationalisation, and policy convergence ever since they came to exist. Students and scholars circulating between universities brought about state-of-art knowledge and prompted social changes. Respectively, monarchs and parliaments exercised control over outlanders, bureaucracy, and underprivileged groups by regulating admission processes. Looking at how sovereign authorities were managing access to knowledge in those days, it is tempting to go even further back in time and join the author of Ecclesiastes in writing, “There is nothing new under the sun”.

Giliberto Capano (Università di Bologna) chose to concentrate on the past three decades that witnessed reforms granting autonomy to higher education institutions. In 15 European countries, the implementation of the same governance template resulted in series of steps that manifested, astonishingly, near-to-zero regularities. Policy interventions seemed neither conditioned by previous developments nor followed a strictly linear logic, and occasionally revealed a dramatic reversal of the previous design. Comparative approach was likewise adopted by Jens Jungblut (University of Oslo) and Pedro Pineda (Universität Kassel). The former introduced a collaborative book project that aspired to integrate so far fragmented pieces of knowledge about multi-level and multi-actor policymaking in Western Europe, Canada, and the US. The latter presenter deconstructed the institutionalisation of peace education in Germany in the 1970s and in Colombia since 2014. In both countries, heads of state played a critical part in promoting the new discipline (though each for a different cause) – yet, filtered through curricular-didactic traditions, their initiatives assumed rather dissimilar forms and characteristics.

Temporality and political leadership were equally important elements in the reports of Sara Diogo (Universidade de Aveiro) and Dorota Dakowska (Université Lyon II). Dorota Dakowska’s study drew attention to the temporality of international organisations in the sense of their perishability. Until quite recently, organisations like OECD and UNESCO have been functioning as influential leaders in knowledge politics; nowadays, a precarious budget position and diminished public legitimacy have seemingly weakened these strongholds. While it is doubtful they face the fate of the League of Nations in the immediate future, their current situation requires much resilience and re-invention.

Sara Diogo presented a carefully crafted analysis of science, technology and innovation policies in Portugal in the period from the 1960s till present. Evidently, the policymakers’ vision of knowledge society evolved from a pro-social ‘progress of science’ to an economic ‘progress through science’. In an attempt to manage knowledge “on top of trends”, the government made some problematic investment choices that blurred the boundaries between higher education and national innovation systems. Consequently, research and researchers have been “immured” within the walls of public universities, and only the partition of the two systems and greater investment in the private sector could unlock the knowledge and arrest the brain drain.

Two salient aspects have defined the functioning of higher education institutions as of late. Firstly, resource scarcity, and secondly, market-oriented reforms in the public sector. Against this backdrop, universities have been framed as strategic organisations with a strong steering core that manages priorities rationally and efficiently. It has become taken for granted that strategic governance leads to enhanced performance and knowledge transfer. In their paper, Davide Donina, Alice Civera, and Michele Meoli (Università degli Studi di Bergamo) dared to challenge this assumption. They compared how Italian universities with appointed vs. elected internal board members performed in regard to spinoffs and patents, and this comparison suggests that the strategic model does not necessarily carry the presumed positive consequences.

Strategic governance is commonly executed through instruments (structural changes, incentives, appraisals, etc.) stimulating desirable behaviours. Moritz Ansmann and Markus Seyfried (Universität Potsdam) examined the utilisation of such an instrument – internal evaluations – for monitoring the quality of teaching and learning. The authors interpreted higher education institutions as the final agent in a chain of principal-agent interactions that delegated quality management from supranational to organisational policymakers. Conforming to the agency theory, internal evaluations diverged in de facto implementation and could also diverge from the intended policy goals, as is the case with formal compliance. This being so, could evaluations ever become anything more than a formalised process? Adrienn Nyircsak (Central European University) seemed to be optimistic about this. Her ethnographic research sought to understand how a one-size-fits-all quality assurance template could generate informal reflexive practices of self-monitoring and self-evaluation.

One more book project presented at the conference by Niilo Kauppi (University of Jyväskylä), Tero Erkkilä (University of Helsinki), and Meng-Hsuan Chou (Nanyang Technological University – NTU) targeted a wider set of numerical and discursive instruments. The authors artistically played upon the meaning of the word ‘alchemy’ to portray the effects of modern knowledge governance in Finland and Singapore, two countries topping the lists of educational rankings. They likened the governments’ search for an ‘algorithm’ that would turn national universities into “gold” – that is, into world-class institutions – to the alchemic process of ‘transmutation’. But what if such algorithms were, in fact, producing “false gold”? 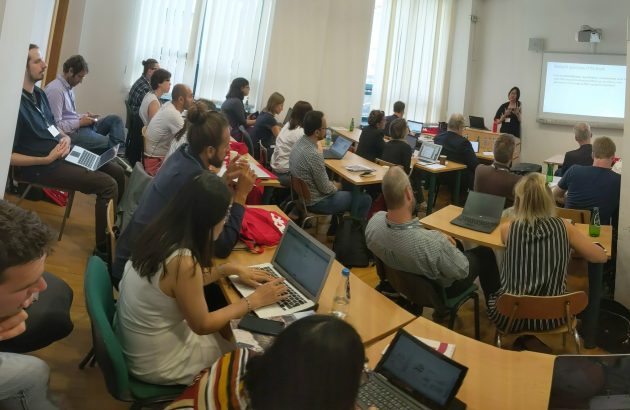 Well-attended panels of Knowledge Politics and Policies section in Wroclaw

Ever since universities began to corporatise, researchers have relentlessly emphasised tensions between market logics and the logics of academic profession. Whatever the pressures put on them, academics have constantly refused to change all their “colours” for policymakers. For example, as follows from Ingvild Reymert’s (NIFU – the Nordic Institute for Studies in Innovation, Research and Education) research on professor recruitment in top Norwegian universities, the pervasive use of metrics in the academy had only a modest effect on peer review evaluations. ‘Academic tribes’ customised the metrics for own disciplines, and their iterations have remained fairly stable over time.

So, what makes the academics run the rat race of publishing in high-impact journals and citation indices? Is this the only thing they can do best, do they mainly seek promotion, or do they genuinely appreciate bibliometric criteria when it comes to talent decisions? Luis Sanz-Menéndez and Laura Cruz-Castro (Universidad Autònoma de Madrid – Instituto de Políticas y Bienes Públicos del CSIC) addressed this question in a large-scale survey of Spanish academics. They found that those who endorsed bibliometric data as one indication of scholarly merit were generally motivated by selfless considerations. The most important attitude predictor was the degree of affinity between the logic of productivity, views on the mission of universities, and professional ethos. Thus, the weaker is the clash of cultures, the easier it is to engage the faculty in managerial innovations, quod erat demonstrandum.

In all fairness, research universities are not alone in struggling to manage their knowledge capital. For their part, universities of applied sciences are concerned with keeping teaching and learning up to speed with the newest developments on the factory floor. In this respect, Hans Frederik (Vrije Universiteit Amsterdam) observed how knowledge circulated between the workplace, students, and lecturers. Among other things, this paper pointed to a loose coupling between lecturers’ work and organisation’s administration that could backfire on the capacity of faculty members to absorb professional knowledge.

To be sure, the magic number of three does not exhaust all possible ways to manage knowledge. Moreover, this year’s discussions cast a long shadow on the very assumption that knowledge can be and is to be managed. What sense does it make to create global templates when they get filtered everyhow on multiple levels? Are the instruments not right, or is the idea of instrumental governance fundamentally wrong? How can managers deal with non-instrumental aspects of knowledge creation and dissemination? To answer these questions, let us keep counting, criticising, and communicating. Welcome to join in our conversation next year at the 14th ECPR General Conference in Innsbruck!

Sofya Kopelyan is a PhD Candidate at the Centre for Higher Education Policy Studies (CHEPS), University of Twente. Her research project is part of RUNIN, an MSCA ITN programme on the role of universities in innovation and regional development. Sofya explores the implications of strategic organisational governance for the regional missions of innovative European universities.