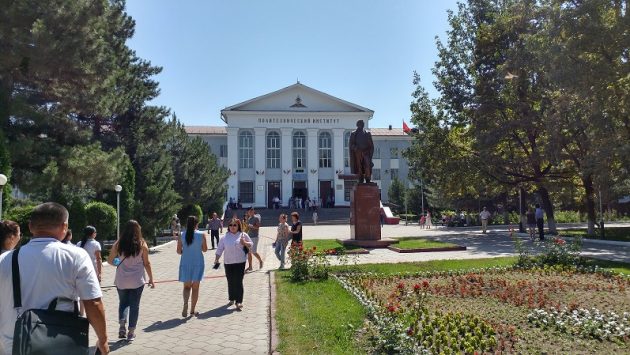 Kyrgyz State Technical University in Bishkek, Kyrgyzstan. Photo taken by Emma Sabzalieva during her fieldwork in 2017

Institutional theories and concepts offer valuable insights into stability and incremental change within institutions. In higher education, Clark’s (2004) notion of a ‘steady state of institutional change’ (169) neatly encapsulates this idea. However, far less consideration has been given to the transformative potential of higher education both to effect and to transmit change in dramatically changing contexts accompanying periods of major institutional (political, social and economic) change (Brennan, King, and Lebeau 2004; Oketch, McCowan, and Schendel 2014; Polyzoi and Dneprov 2010).

My aim in developing these methods was to understand how academic authors writing about higher education across the former Soviet space since 1991 have conceptualized this moment of major institutional change, and how their perceptions have changed over time. I studied a total of 57 peer-reviewed articles: 34 articles from 18 journals written in English language and 23 articles published in 12 Russian-language journals. This is the first English language study of Russian language literature on this topic, thus enabling knowledge to be shared across cultures and language worlds.

Mapping processes and outcomes of change

In the first method, I drew on a framework from institutional theorists Streeck and Thelen (2005) which delineates both the process of change (as being incremental or abrupt) and the outcome of change (as being continuity or discontinuity). To enhance the flexibility and fluidity of the framework, I used social cartography techniques (Paulston 1996, 1998) to transform the typology into a map, onto which I placed the authors of the 34 English language articles I analysed. Moving beyond a standard 2 x 2 grid, the map offers multiple combinations of process and outcome depending on the authors’ location on the four quadrants of the map. The location was determined by my interpretation of the content and conclusions drawn in each article, and some articles fell across the boundaries of more than one quadrant.

Nearly a third of the articles (11/34) fell somewhere into the ‘reproduction by adaptation’ quadrant, where change was depicted as (an) incremental process(es), the outcome(s) demonstrative more of continuity than discontinuity. This suggests that higher education as an institution is relatively stable and can withstand external shocks. The fewest articles (5/34) were placed within the ‘survival and return’ quadrant, where articles would be focusing on major break points from previous trajectories but despite this, for change not necessarily to occur. In the articles I placed in ‘gradual transformation’, much is made of the ambiguity of change processes in higher education. Articles in the ‘breakdown and replacement’ quadrant tended to conceptualize change along the lines of a punctuated equilibrium model: genuine change takes place over a short space of time, and results in discontinuity.

In the second method, I employed a typology of policy change adapted from Semyonov and Platonova (2016). They identify three phases of policy change in the institutional landscape of Russian higher education since 1991: a period of laissez-faire from 1991-2003 when government intervention in higher was low (although there were legislative changes during this time); major reform between 2004-2011 when the state made significant investment in the development of higher education, and 2012-date, which is characterized as a period of New Public Management.

Again employing social cartography, I created a map of these three periods of policy change and placed the themes found in my analysis of Russian language articles onto the map. This map differs from the first method in its emphasis on themes rather than on the divergent positioning of individual articles. The set-up of the map is geared to represent change over time, and I extended Semyonov and Platonova’s analysis by using a Venn diagram style map to additionally indicate areas of overlap between the phases. For the most part, my findings from analysing Russian language articles show broad convergence with the explanation of the periods of policy change in Semyonov and Platonova.

However, one example of differentiation comes with the frequent discussion of the role of faculty members, flipping the stress from policy change to how those within the higher education system respond to that change. Another divergence was in the emphasis on the value of higher education, with the persistence of higher education as a cornerstone of Russian society emerging strongly across the time periods.

Both of the methods I used in this study draw on social cartography, inspired by postmodernist thinking on heterogeneity and representations of change. The study brings together these ideas from social cartography with two frameworks grounded in new institutional thinking to represent change and continuity in higher education. In doing so, the study offers new ways of thinking about how to overcome the recognized limitation of new institutional theory in dealing with major – as opposed to incremental – change.

My hope is that the two methods I developed in this paper serve to engender further dialogue and questioning about how major change is conceptualized. These methods open up new ways to understand the processes and outcomes of change, as well as how change changes over time, and future research could not only consider these maps in other contexts of major institutional change but explore other innovative methods of interrogating and moving beyond existing limitations in institutionally grounded studies.

This blog post is based on the paper that won the Award for Excellent Paper from an Emerging Scholar from the ECPR Standing Group ‘Knowledge Politics and Policies’. This is the third time this prize has been awarded. Previous winners are Olivier Provini and Que Anh Dang. The call for the next award will be announced soon.

Emma Sabzalieva is a doctoral candidate at the University of Toronto (Canada). Her PhD thesis examines how higher education responds to major institutional change, incorporating an empirical study of the response of higher education at system and organizational level in Central Asia to fall of the Soviet Union. Her core research interests are the global politics of higher education and international academic relations.

Brennan, John, Roger King, and Yann Lebeau. 2004. “The Role of Universities in the Transformation of Societies.” London: Association of Commonwealth Universities/Centre for Higher Education Research and Information.

Semyonov, Dmitry S., and Daria Platonova. 2016. “Stages of Policy Changes and Institutional Landscape of Russian Higher Education.” Higher Education in Russia and Beyond 2 (8): 23–24.