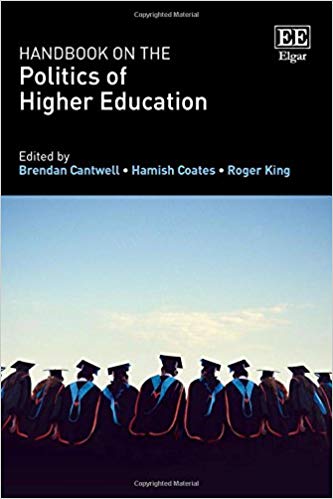 While analysis of higher education policy has been the hallmark of the higher education research field, questions concerning the politics of higher education have not been considered in and of themselves to the same extent (but see Jungblut, 2015, 2016). This is contrast to the still growing political salience of higher education (Busemeyer, Franzmann, & Garritzmann, 2013; Gornitzka & Maassen, 2014), in particular given the focus on knowledge as the foundation of our societies and economies and the increasing competition for resources within the sector as well as with other sectors (e.g. health, social welfare, security, and environment).

Secondly, and perhaps more importantly, putting politics off the centre in higher education research does not reflect the multiple ways that higher education institutions reflect ideological and political conflicts in and between our societies (Castells, 2001). They are (and have been) the sites of student and staff protests, which can (and did) spillover into more general civic unrest. They are marked with fierce debates about the relationship between free speech, academic freedom and implications of providing (or denying) platforms to specific political groups. They are sites of individual and organizational level resistance to autocratic regimes or countries backsliding into autocracy. They are marked by tensions and struggles related to multifaceted aspects of diversity and intersectionality, position and experiences of various minority groups within academia, student and staff rights in an increasingly marketised and precarious context, and (often fierce) debates about colonial heritage of certain systems and institutions and the initiatives to decolonize curriculum.

Earlier this year, Edward Elgar published the Handbook on the Politics of Higher Education, edited by Brendan Cantwell (Michigan State University), Hamish Coates (Tsinghua University) and Roger King (University of Bath). The Handbook comprises 29 chapters organized into five distinct parts, with an overarching introduction provided by the editors. Here, Cantwell, Coates and King highlight the multi-faceted nature of politics of higher education, stressing the inherently political character of higher education and discussing the various implications of expansion, globalisation and increasing role of knowledge in our economies and societies.

The first thematic part of the Handbook focuses on the relationship between the university, state and society, specifically issues of trust, social dimension, implications of state transformations, and the position and role of civil society in studies about higher education.

The second thematic part takes a political economy perspective, and discusses the nature of global higher education governance, macro-regional developments, use of higher education for geopolitical purposes and its soft power.

The third part hones into planning and resource allocation, in particular within nation states, and stresses challenges stemming from competition from other public sectors, various forms of student contributions and loans, use of data (e.g. on workforce) in planning and political side of decisions related to funding for research and development.

The fourth part hones in regulation and quality, staple topics in higher education research, yet here explored with a political twist on issues such as transparency, institutional audits, and regulation of risk and diversity.

The final part shifts the focus to different stakeholders and their interests in and of higher education, both from a generic point of view – who is considered a stakeholder and how are they involved in politics of higher education, as well as more specific discussions of gender politics, politics of academic work, student representation and activism and university-industry relations.

Overall, the Handbook responds to the increasing (or continuing?) politicization of higher education  by providing one of the first comprehensive outlooks on this issue and the basis for further elaboration in and consolidation of this research direction.

Martina Vukasovic is an Associate Professor at the Department of Administration and Organization Theory, University of Bergen. Her research focuses on multi-level multi-actor aspects of governance, in particular the various roles stakeholder organizations play in agenda-setting, policy formation, implementation and evaluation. She contributed to the Handbook with a chapter titled “Stakeholder Organizations and the Multi-level Governance of Higher Education”.