This year’s ECPR (European Consortium of Political Research) General Conference took place at the University of Hamburg (Germany) August 22-25. The conference included 520 panels on a wide array of topics and representation from more than 2,000 academics from around the world. The ECPR Standing Group on the Politics of Higher Education, Research and Innovation, for the seventh time in a row (following Oslo 2017,  Prague 2016, Montreal 2015, Glasgow 2014, Bordeaux 2013 and Reykjavik 2011) organised a section with a total of six panels covering various themes related to knowledge policy governance.

European integration in the area of higher education and research continues to be in focus, and this year one panel explicitly focused on differentiated integration, specifically (1) the varied nature of policies and instruments on the European level, and (2) the varied national and institutional adaptation to these instruments. The panel opened with the presentation by Natalia Leskina on several overlapping initiatives in the post-Soviet countries aiming at establishing the Eurasian Higher Education Area and how European integration initiatives (specifically the Bologna Process) have been used as a model by the post-Soviet countries. Simona Torotcoi took the domestic side of differentiated integration as her point of departure and explored compliance and implementation of recommendations concerning two Bologna Process aspects – quality and social dimension – in Portugal and Romania. This was followed by Tim Seidenschnur and Jens Jungblut who identified four distinct narratives – concerns, hopes, beliefs and silent opportunism – that permeate German higher education perspectives on what the consequences of Brexit might be for, among others, student mobility (and in particular mobility of students preparing to be language teachers) and research cooperation. Brexit was also the topic of the paper by Amelia Veiga, who juxtaposed the reflections of academics from 10 European countries (Denmark, Germany, Hungary, Republic of Ireland, Netherlands, Norway, Poland, Portugal, Switzerland, United Kingdom) concerning Brexit with the European Commission’s scenarios for 2025. Finally, Mari Elken and Martina Vukasovic discussed the European side of differentiated integration in higher education, in particular the implications of the existence of several overlapping policy arenas at the European level, how EU initiatives get diluted over time (shifting from big political aims to rather technocratic considerations) and what is the role of regional level integration (e.g. within the Nordic region) in the overall process of European integration.

The second panel went beyond Europe and explored issues of global knowledge governance. Meng-Hsuan Chou focused on recruitment of academics globally, specifically analysing, on the one hand, the policies and incentives developed in Singapore to attract more academics and, on the other hand, the rationales and motivations of academics themselves to choose Singapore as their academic home. Tero Erkkilä discussed the ideational linkages between the rise of numerical governance (i.e. governance by global indicators) and knowledge based competitiveness, stressing the role international organizations have in promoting these policy scripts. Janja Komljenovic presented her paper (co-authored by Eva Hartmann) on the role of global private actors in governing higher education, with a specific focus on graduate employability and skills and what are the actual practices and measures used by higher education institutions to mediate the transition of students into employment. These global private actors were also discussed by Miguel Antonio Lim, who highlighted how companies and individuals involved in the business of university ranking build their expertise and legitimate themselves and their products to a global audience, specifically positioning themselves as weak experts.

The next panel was dedicated to neo-institutional approaches to analysis of higher education, research and innovation. Jens Jungblut explored the diffusion of innovations from universities to pharmaceutical industry and hospitals and translation challenges that exist both between sectors characterized by different institutional logics as well as between different countries. Georg Krücken and Tim Seidenschnur presented their analysis of why management consultancy projects in universities are not particularly successful, in particular the role of different actors and communities within universities in ascribing or denying legitimacy to management consultants. Emma Sabzalieva presented her review of the concept of major institutional change in higher education, utilizing both the more generic literature on the topic and the higher education specific insights, and exploring the extent to which these perspectives can be utilized beyond its original Western context, e.g. in relation to the fall of the Soviet Union in 1991 and implications this had for higher education systems and institutions. Alexander Mitterle focused on whether and how neo-institutional approaches can be used not only to study similarity, but also stratification in higher education, specifically contrasting several approaches to field theory, in particular how Bourdieu’s and Fligsten/McAdams’ concepts of fields can be enriched by a more phenomenological perspective to actorhood.

The fourth panel focused on a major intersection of science and politics – distribution of funding for research and innovation and is a follow up to a previous panel on research executive agencies in Oslo. Four papers were presented. Stefan Skupien discussed choices and tensions concerning asymmetrical research collaborations, such as the one concerning European cooperation (supported by both public and private partners) with African partners in the field of renewable energies. Thomas Palfinger and Peter Biegelbauer compared 12 innovation agencies operating in Europe and their 18 programmes, specifically discussing legitimacy of their funding decisions in relation to how evaluators are selected, what is their role, what project selection criteria they use, how are projects ranked and what are the decision-making procedures. Emina Veletanlic and Creso Sá focused on the Canadian largest research-funding agency (The Natural Sciences and Engineering Research Council) and how the shifts away from support for basic research and towards targeted programmes affects basic research in these fields. Thomas König and Sarah Glück concluded the panel with an exploration of agencification of EU research policy, specifically what is the relationship between European executive agencies and (1) the European Commission, (2) other EU institutions and (3) national administrative agencies and ministries involved in research and innovation. 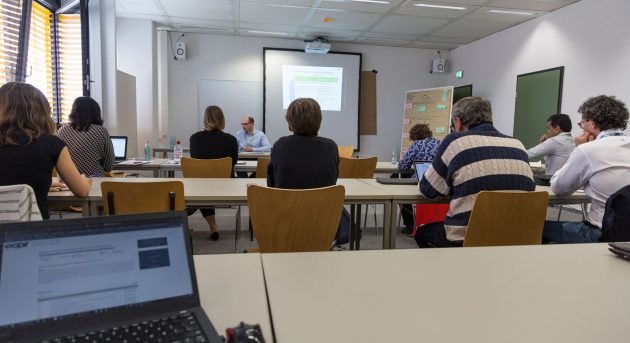 The fifth panel continued the focus on research, namely the politics of Big Science and research infrastructures. It was organised by recently launched Big Science and Research Infrastructures Network that brings together researchers and practitioners interested in large-scale research facilities and international scientific collaboration. Nicolas Rüffin presented his research on unanimity in decision-making at two large intergovernmental science organizations – CERN and European Space Agency. Isabel Bolliger in turn compared research infrastructure policies in Switzerland and Sweden demonstrating differences in development of their national research infrastructure roadmaps. Finally, Inga Ulnicane discussed political and scientific changes in research infrastructures highlighting that in addition to ‘good old’ intergovernmental large-scale facilities such as CERN new types of digital platform infrastructures are emerging according to differentiated integration approach that involves a number of EU member states as well as associated countries.

The final panel highlighted the normative power of Europe in shaping higher education and science policy environments, as well as the complex relationships between instruments and institutions in higher education, research and innovation. Que Anh Dang addressed theoretical and empirical challenges in using the ‘normative power’ approach for analysing developments in Asia. Specifically, she addressed the roles EU and China played, in particular the differences between a rather high-level promotion of European approaches and the people-to-people exchange policy within China’s Belt and Road Initiative. Claudia Acciai compared developments in innovation policy in France and Italy, primarily addressing the heterogeneity of actors and the implications this has for choice of policy instruments and the overall policy design. Elizabeth Balbachevsky highlighted the nested character of science as an institution, the implications this has for the institutional resilience of the University and what are the similarities and differences in how University of Sao Paulo in Brazil and University of Tampere in Finland responded to environmental expectations.

Apart from lively discussions within panels, the Standing Group also had its annual meeting focused on planning future activities, including ECPR 2019, which will take place in Wroclaw. The meeting was also marked by the Award for Excellent Paper from an Emerging Scholar to Olivier Provini for his paper “Transnational circulations of university reforms: the policy-making of the LMD in Burundi”. ECPR 2018 was another successful year for our Standing Group, gathering researchers currently based on three continents (Asia, Europe and North America). See you at the next ECPR General Conference in Wroclaw in September 2019!