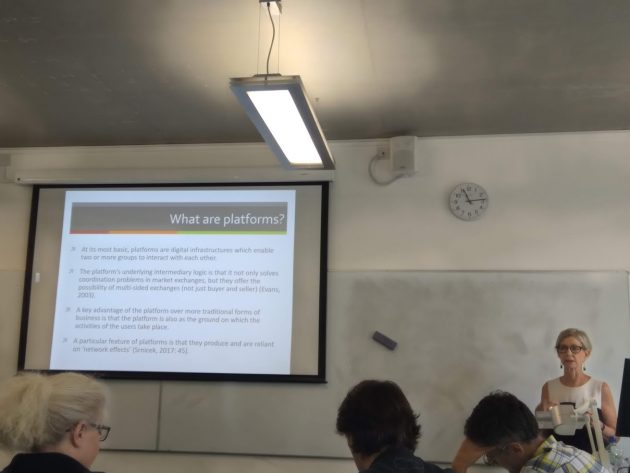 ‘Making & Doing Technoscientific Futures Better’ was the title of the sixth CPERI (The Changing Political Economy of Research and Innovation) workshop that took place on the 23rd and 24th July in Lancaster (UK), just before the European Association for the Study of Science and Technology EASST 2018 conference. CPERI presents itself as ‘a unique global forum for the exploration of scholarship regarding the political economy of research and innovation (R&I), and hence at the intersection of STS [Science and Technology Studies], political economy and multiple other cognate disciplines, including geography, sociology, politics, law, education, medicine, engineering, computing & philosophy’. Previous CPERI workshops have taken place in Lancaster (2012), Toronto (2013), San Diego (2015), Liege (2016) and Boston (2017).

What is political economy of research and innovation or technoscience? Kean Birch defines the political economy of technoscience by ‘the ways that the economy is ethically, socially and politically organized and configured and how this shapes technoscience and is constituted by technoscience in turn’ (Birch 2013: 49; see also Tyfield et al. 2017). His proposed research agenda ‘is based on the claim that STS needs to take account of contemporary economic and financial processes and how they shape and are shaped by technoscience. This necessitates understanding how these processes might impact on science, technology and innovation, rather than turning STS gaze on the economy’ (Ibid).

The 2018 CPERI workshop in Lancaster brought together some 30 established and emerging researchers from around the world. Among them were those who have already attended one or more CPERI workshops as well as newcomers to this growing community. Topics discussed during these two days included technoscience and biomedical futures, responsible research and innovation, platform capitalism and its impact on universities. 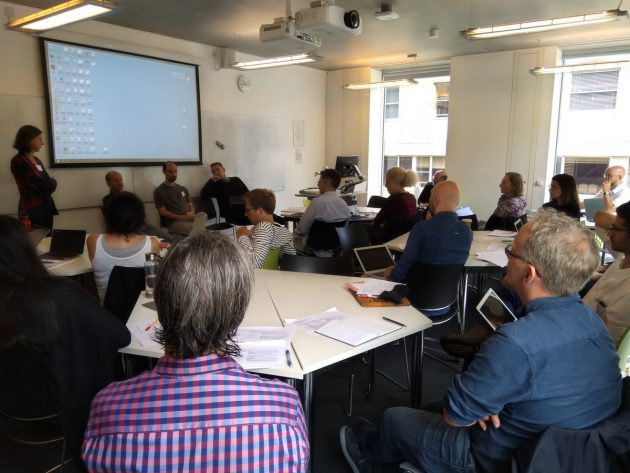 Responsibility in science, technology and innovation

Discussion of responsible research and innovation futures addressed broader issues of responsibility in science, technology and innovation as well as more specific concept of ‘responsible research and innovation’ (RRI) that in the last ten years has been promoted by a number of research funders in Europe (De Saille 2015; Rip 2016). Stevie de Saille raised important questions for implementation of the RRI concept such as ‘can society really modify the direction of a research agenda, let alone say STOP once a trajectory is in motion?’ and ‘what constitutes ‘responsibility’ in a global field, and how might that change not just in place or time, but in light of other developments along the value chain?’ The workshop participants were particularly interested in her concept of ‘responsible stagnation’ that she defines as a particular configuration of change guided by restraint and living gently and where ethics matters more than growth (see also De Saille and Medvecky 2016). Inga Ulnicane applied ideas of responsibility to dual use research and technology. She argued that ‘responsible dual use’ approach becomes particularly relevant in the context of changing security and research funding landscape in the European Union (EU) where in addition to traditional support for civilian research in the Framework Programme, the EU is also allocating funding for dual use research and developing support for defence research.

Overall discussion of RRI touched upon the potential future of this concept considering that current discussions on EU research policy are dominated by concepts such as ‘missions’ and ‘three Os’ of Open Innovation, Open Science and Open to the World. In the long-term, concepts and framings in research and innovation policy tend to change presenting old ideas in novel ways, as it has happened with many ideas before such as ‘triple helix’ or ‘Mode II’ knowledge production (Ulnicane 2015). Recently Arie Rip has suggested that ‘RRI will disappear as a Brussels thing, not at the level of member states and organizations. It might change its acronym’ (Calvert and Rip 2018: 193). 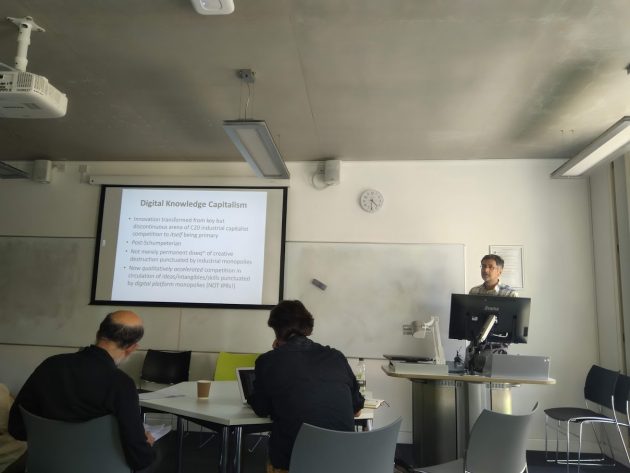 One of the main topics of the workshop was the development of platform capitalism and impact of digital platforms on universities. Janja Komljenovic analysed the case of Linkedin demonstrating how it has been strategically targeting higher education sector and building digital market place for skills (Komljenovic 2018). In her keynote ‘The University in an Age of Platform Capitalism’, Susan Robertson set out an innovative research agenda to study different kinds of platforms in the academy. Her approach to comparing platforms focused on the purposes and processes of knowledge production, for example, curating, publishing and learning. By looking at platforms as infrastructures, she asked major questions about what kind of futures are being created and do these new infrastructures create and make ‘better futures’ for whom.

Further changes in academic capitalism were discussed by Elena Šimukovič in her presentation on politics and realities of facilitating open access and their impacts on the science system. Tereza Virtova’s talk on chronopolitics in experimental physics focused on implications of project work in contemporary academia. Mark Carrigan’s keynote discussed the institutionalisation of social media use in the higher education sector. Ismael Rafols presented his approach to help pluralising decision-making in science policy and aligning research priorities to societal needs. Luca Marelli discussed the EU General Data Protection legislation as a novel tool for biomedical research. David Tyfield argued for a new social contract for university in the times of digital knowledge capitalism. After the workshop, the Institute for Social Futures and the Centre for Higher Education Research & Evaluation hosted a public debate between Phil Mirowski and Steve Fuller. They debated if neoliberalism is a threat or an opportunity for the future of universities.

Debates and talks of the workshop sketched out some of the most urgent questions in contemporary political economy of research and innovation as well as many ideas for making and doing tehnoscientific futures better would it be by moving to open and responsible knowledge platforms or to new social contract for research and innovation.

Birch, K. (2013) The political economy of technoscience: An emerging research agenda’ Spontaneous Generations: A Journal for the History and Philosophy of Science 7(1):49-61.