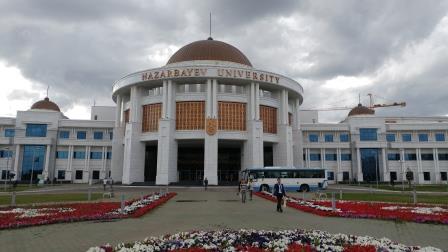 We live in an era of intense and growing international connections, but also in a world of significant positional differences between localities, states and regions.

In this context, how can the idea of the world-class university be used by states to survive and succeed? What does this idea look like in states that are outside of the European and North American “core”?

Out of the frying pan and into the fire

The global legacy of colonialism and imperialism bears a clear imprint on today’s world order. This is highly evident in the politics and policies of contemporary post-Soviet Central Asia, the area I study. Bissenova and Medeuova (2016) have compellingly argued that the Central Asian countries have in effect jumped out of the 20th century “frying pan” of the Marxist-Leninist discourse of development straight into the 21st century “fire” of a globalized capitalist discourse of modernization, in which states outside the West will always be trying to catch up to an ideal they didn’t create.

Since the fall of the Soviet Union in 1991, public policy in the Central Asian states has looked not just to former centre Russia but globally for influence and ideas. In the sphere of education, all five of the Central Asian states – Kazakhstan, Kyrgyzstan, Tajikistan, Turkmenistan and Uzbekistan – have adopted elements of the European Union’s Bologna Process, and – uniquely so far – Kazakhstan is also a member of the European Higher Education Area.

In my recent article ‘The Policy Challenges of Creating a World-Class University Outside the Global “Core”’ (Sabzalieva 2017), I explored in further depth the public policy challenges and opportunities Kazakhstan faces as it seeks to create a brand new world-class university.

The idea of the world-class university has become widespread not only as a seemingly replicable model in higher education, but as a policy pursuit of governments around the world. Public policy in Kazakhstan too has followed this logic.

I believe that the institutionalization of the idea of the world-class university is reinforced by three major dynamics:

·         Firstly, the neoliberal logic of efficiency has led to much greater selectivity in the areas that are supported financially by the state, with world-class or excellence policies being one such funding stream;

·         Secondly, there is growing convergence around the concept of the knowledge economy, the notion that brain power will bring prosperity and competitiveness to a state. Universities play a key role in this discourse, with the result that governments use policy levers such as world-class university projects to fulfil their objectives;

·         Thirdly, despite the impact of intensifying globalising forces that push for greater international engagement with and by higher education, the nation-state persists, using public policy to seek or consolidate national competitive advantage, for example through the creation of world-class universities.

Faced with these dynamics, the rapid spread of the world-class university around the globe can be understood as a policy tool used by states to survive and succeed in the contemporary era.

A world-class university for Kazakhstan

In 2006, Kazakhstan’s President Nazarbayev proclaimed that “to establish a unique academic environment in our capital, a prestigious international-standard university needs to be created” (Nazarbayev 2006).

In a stunning feat of planning and construction, that “international-standard university” – now known as Nazarbayev University – has not only been built and populated, but celebrated the graduation of its first cohort of students less than a decade later.

With the opening of Nazarbayev University, opportunities have been created for academically excellent students to pursue high quality programmes and for a strong and highly international faculty to pursue teaching and research, all housed in an extremely well-equipped and generously funded environment. The legally bound commitment to academic freedom and institutional independence gives the university rights and responsibilities in governance that are currently unparalleled in Kazakhstan.

I discuss these three factors of human resources, funding, and governance in more detail in the article. As the Nazarbayev University project is still very new, I also raise a number of policy challenges that warrant further and detailed investigation.

Both global and national: a unique example

Global higher education watchers will identify some parallels between the rapid ascent of Nazarbayev University and other institutions also claiming to be world-class, such as Saudi Arabia’s King Abdullah University of Science and Technology or the National University of Singapore.

However, I consider Kazakhstan’s journey to a world-class university to be unique in three respects.

Firstly, in Kazakhstani public policy, the role of higher education in the knowledge economy is a critical element of the country’s strategy to reposition itself in the world system as one of the top 30 (the policy goal was originally to be a top 50 global economy, but this has since been raised to the top 30) global economies. Nazarbayev University was founded to act as a figurehead for the reforms that are expected to be adopted and adapted throughout the tertiary sector in Kazakhstan.

Secondly, although some nation-building ventures in Central Asia have been seen as contrived, the Nazarbayev University project, whilst experimental, is nevertheless a credible demonstration of a commitment towards national consolidation and improvement, substantiated by its ‘role model’ status within the national higher education system.

Thirdly, this dual policy commitment to both the national and the global sets Kazakhstan apart from many of the other states similarly investing in select higher education institutions.

Where to from here: adopt, adapt, or invent anew?

There seems to be no question that the notion of the ‘world-class university’ is here to stay for the foreseeable future, and that it currently shows a continuing dominance of what is essentially a Western model of higher education.

This suggests another policy challenge for the states that do choose to develop their own world-class university: should they seek to replicate what they have seen elsewhere, or diversify the idea, thus making it a new one?

My case study of Nazarbayev University offers a worked example of the Kazakh government’s openness to aligning with international “best practices”, wherever these may be found (Tamtik and Sabzalieva forthcoming). This reflects a pragmatic ideology, recognizing that the world-class university model has benefits and seeking to build on these by domesticating the concept for a different context.

Continuing to study Nazarbayev University and the public policies of Kazakhstan will be critical to understanding the scope for states such as Kazakhstan to move beyond “frying pans” and “fires”, and innovate in ways that influence and diversify the positioning of a future world order.

Emma Sabzalieva is a doctoral candidate and Vanier Scholar at the Centre for the Study of Canadian and International Higher Education (CIHE), University of Toronto, Canada. Her core research interests are the global politics of higher education, social change, and contemporary Central Asia. Her wider research interests span ideas and knowledge creation, public policy, social institutions, university/community engagement, and the history of universities. Her website is http://emmasabzalieva.com.

Nazarbayev, Nursultan. 2006. “Poslaniye Prezidenta Respubliki Kazakhstan N. A. Nazarbayev Narodu Kazakhstana. Strategiya Vkhozhdeniya Kazakhstana v Chislo 50-Ti Naibolee Konkurentosposobnikh Stran Mira: Kazakhstan Na Poroge Novovo Ryvka Vpered v Svoem Razvitiyi [Address by President of the Republic of Kazakhstan N. A. Nazarbayev to the People of Kazakhstan. A Strategy to Include Kazakhstan in the List of the 50 Most Competitive Countries in the World: Kazakhstan on the Threshold of a New Leap Forward in Its Development].” Official Site of the President of the Republic of Kazakhstan. March 1, 2006. http://www.akorda.kz/ru/addresses/addresses_of_president/page_poslanie-prezidenta-respubliki-kazakhstan-n-a-nazarbaeva-narodu-kazakhstana-mart-2006-g_1343986805.