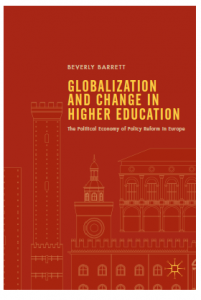 The internationalization of higher education is a response to the pressures of globalization. There are economic, political, and social explanations for the reforms that have taken place in Europe since the Bologna Process launched 18 years ago on June 19, 1999 in the historic university city of Bologna, Italy.

Correspondingly, these explanations for internationalization of higher education are globalization (economic), intergovernmentalism (political), and Europeanization (social). The progress of the Bologna Process to create the European Higher Education Area (EHEA) originated with the Sorbonne Declaration among the education ministers of France, Germany, Italy and the United Kingdom on May 25, 1998.

My new book Globalization and Change in Higher Education: The Political Economy of Policy Reform in Europe (published by Palgrave Macmillan) explains the institutional change that has taken place as a response to these pressures.[1]  The 21st century’s increasing demands for knowledge reflect a knowledge society that is driven by a knowledge economy (David and Foray 2002).[2] This is defined as an economy in which growth is dependent on the quantity, quality, and accessibility of the information available. Universities and all types higher education institutions have experienced unprecedented institutional change in the knowledge society (Cantwell and Kauppinen 2014).[3] Educational sociologists have concurred that the international convergence of academic programs’ criteria that comes from the Bologna Process is unprecedented (Frank and Meyer 2007:299).[4]

The history, ideas, and institutions that frame our understanding of higher education are set out in the initial Chapters of the book, which frame the analysis in a historical institutional theoretical perspective.  The three primary objectives of the Bologna Process are convergence of higher education policies in 1) academic degree structure, 2) quality assurance, and 3) automatic recognition of degrees within the EHEA. Chapter 4 explains the dual roles of higher education institutions, as recipients of policy change from the national and European levels and as agents of policy change in the knowledge economy. The Bologna Process intersects with the higher education attainment objective of the Europe 2020 economic growth strategy of the Europe Commission. Chapter 5 explains, in quantitative assessment, that the most statistically significant relationship for higher education attainment is with GDP per capita among other variables in the political economy including employment, trade, R&D investment, population, and education spending.

With similar histories of political governance and distinct structures of government, the Iberian countries, Portugal and Spain, provide qualitative assessment case studies for countries within the EU.  Chapters 6 to 9 explain that given the unitary government of Portugal, the process of reform has proceeded with more uniformity than in the quasi-federal government of Spain. In the country of 17 autonomous communities of sub-national regions, Spain has 11 higher education qualifications agencies as compared to most EHEA countries that have one, indicating the complexity of higher education in the country.  Portugal has made greater progress, from 11 to 31 percent, than Spain’s progress, from 29 to 42 percent, toward the Europe 2020 target objective for 40 percent (of 30-34 year-olds) for higher education attainment, though Spain has reached the target (Eurostat 2016).

Referencing back to my posting in 2013, the Bologna Process has been a model for the regionalization of higher education throughout the world. The Association of Southeast Asian Nations (ASEAN) has developed its own Qualifications Reference Framework.  In North America, the Canadian and U.S. structures are similar. The U.S. and Mexico, together with Canada, have opportunities to collaborate, once able to overcome uncertainties around security, funding, and availability of academic mobility programs.[5]  The next step following graduates’ mobility is mutual recognition of professional qualifications, for which the ASEAN region continues to make progress.[6]

Among the key findings in the book are that these aspects of domestic politics matter for higher education policy reforms:

Today the 48-country EHEA, with the European Commission as a partner, continues to develop a higher education space where academic qualifications become recognized across countries. Competitive external economic pressures are part of globalization, while domestic politics influencing international cooperation drive intergovernmentalism. Leadership from the supranational EU that socially engages stakeholders and constructs regional norms is Europeanization. Approaching the end of the second decade of the Bologna Process, the change in higher education finds economic, political, and social explanations.

Beverly Barrett has served as Lecturer at the Bauer College of Business in Global Studies and at the Hobby School of Public Affairs at the University of Houston. She served as Associate Editor of the Miami European Union Center of Excellence following her doctoral fellowship. Current research interests include international political economy, regional integration, and governance with particular emphasis on education and economic development.

(In) voluntary mergers in higher education: a story from Norway | B-STA-R: A new dataset to study science diplomacy and global science | Knowledge Politics and Policies @ ECPR 2021 General Conference | From semester to credit hour – the historic making of academic time as a strategic resource | About time to research higher education! – A workshop-based reflection on European higher education research(ers) in times of uncertainty |