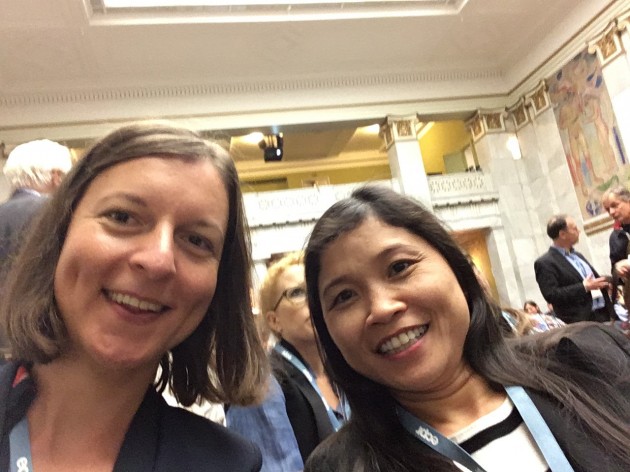 Janja Komljenovic and Que Anh Dang at the conference

‘Unbundling and reassembling knowledge production’ was the title of the panel that I have convened with Susan Robertson at the recent General Conference of the European Consortium for Political Research (ECPR) that this year took place in Oslo, 6-9 September; this panel was part of the section organized by the ECPR Standing Group ‘Politics of Higher Education, Research and Innovation’. I have organised this panel to tackle the increasing set of processes that are targeting the traditional university, unpacking its activities and reassembling them in such a way to transform the higher education sector. The university was traditionally the key or ‘only’ social institution engaged in advanced, credentialed knowledge production and dissemination in the higher education sector. Now we witness the increasing number of actors who are attempting to unbundle the university and its functions. The panellists were curious about who these actors are, what are their strategies and tactics and what the consequences are for the sector and society at large. Most importantly, we were attempting to look closer at the ‘unbundling’ as a process, which is defined as: “the differentiation of tasks and services that were once offered by a single provider or individual (i.e. bundled) and the subsequent distribution of these tasks and services among different providers and individuals” (Gerhke and Kezar, 2015, p. 96).

The first presenter, Joonha Jeon from the Korea Advanced Institute of Science and Technology, tackled the so-called third mission of the university and how the policy intervention of the state is un-bundling and re-bundling the relationship between universities and the industry. He focused on the key South Korean funding programme starting in 2012, Leaders in Industry-university Cooperation (LINC). Based on the study encompassing document analysis and in-depth interviews, he found that the programme was not fully successful in bringing universities and companies closer together for the purpose of companies contributing to study courses and research and on the other hand universities opening up to the needs of the industry. Instead, the programme had a different effect. It stirred universities towards becoming the ‘industry serving agencies’ in that they are increasingly taking over the role of the public agencies to deliver the labour, but without adequate payment. This is in opposition to the general perception of a university as a public service institution. Moreover, LINC resulted in institutional isomorphism at universities. The type of unbundling that we see here is that the the cooperation between universities and the industry is re-bundled in such a way that universities are becoming a funnel for government funds and labour into the private companies.

The second presenter, Farah Purwaningrum from the Sydney Southeast Asia Centre at the University of Sydney, analysed the third mission of universities as well, but on the case of Malaysia. She focused on a different angle, i.e. she was interested in how the third mission as envisaged by the state ministry affect the knowledge production at the university. She analysed the government policy documents and then narrowed her research for in-depth study of the case of the University Science Malaysia in Penang in Malaysia. She concludes that there is a paradigm shift in the overall conditions for higher education and science in the country, which poses new expectations towards the universities.

Finally, I presented a study on social media and how they might unbundle the university’s operations more generally. Using the case of LinkedIn I focused not only on unbundling of the study courses and research process, but the managing of the university including its wider functions, such as caring for employability of graduates. Building on the study of LinkedIn’s documents including its platform and the case study of the two UK universities, I found that LinkedIn could be conceptualised as serving four main functions that are interwoven in practice. First, it provides use value to students, alumni and universities as institutions. Second, it is a device for ordering and expanding higher education markets (see also our post on making global education markets). Third, it is a marketplace for labour and skills. And finally, it is a source of big data in the digital economy. After analysing these functions, I have asked the following questions about unbundling. First, whether we can talk about re-bundling of knowledge as a consequence of a renowned focus on skills and unbundling the provision of knowledge, endorsed by LinkedIn. Second, whether we can talk about re-bundling competition and markets in higher education as a consequence of new forms, scale, scope and temporality of competition between universities and their valuation that LinkedIn’s platform is providing. Third, if we can talk about re-bundling employability as a consequence of the focus on personal branding and using institutional alumni networks. Finally, if we can talk about re-bundling ‘the expert’ as a consequence of the platform promoting particular forms of content and expert knowledge as well as specific people as opinion leaders. 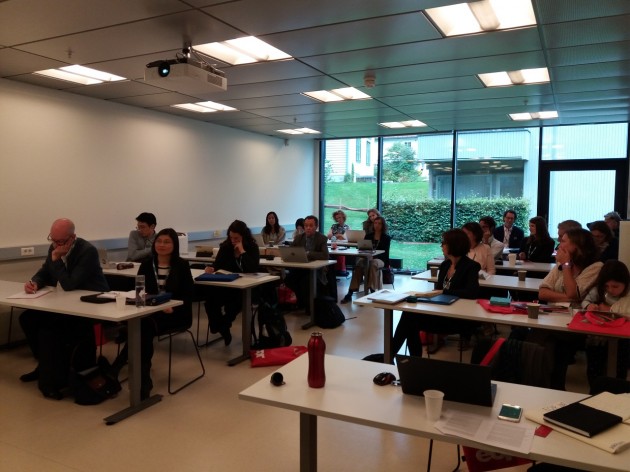 Panel at the Politics of Higher Education, Research and Innovation section

The three papers and the panel as a whole found that on the one hand we can witness clear examples of the unbundling process, while on the other there is still a ‘gold standard’ of the integrated research university. “The process of unbundling is, therefore, an incipient one, and concentrated in a few countries. Nevertheless, the likelihood is that it will spread and accelerate, in particular in light of its close link with the for-profit sector, in which much current HE expansion is located, and the transnational nature of many for-profit companies” (McCowan, 2017, p. 2). The panel thus contributed to the emerging literature on unbundling in the higher education sector and it called for future empirical and theoretical work on this process.

My attendance at the ECPR conference was supported by the Micro Travel Grants of the Marie Curie Alumni Association.

McCowan, T. (2017). Higher education, unbundling, and the end of the university as we know it. Oxford Review of Education.