The 24th World Congress of Political Science organized by the International Political Science Association (IPSA) took place from July 23 until July 28 2016 under the title “Politics in a World of Inequality”. The conference was held in cooperation with the Adam Mickiewicz University in Poznan (Poland) and around 3000 participants, mainly from political science, were attending it.

Originally the conference was supposed to take place in Istanbul, but due to the security situation as well as the contentious relationship between the Turkish political scientists and the Turkish government the IPSA and the local Turkish organizers decided earlier this year to move the conference to Poland. In light of this and due to the recent events in Turkey the topic of academic freedom was a reoccurring theme at the conference being addressed both in the opening as well as closing ceremonies and in the context of a special roundtable.

Members of the ECPR Standing Group on Politics of Higher Education, Research, and Innovation organized a panel at the conference under the title “Knowledge Policies and the State of Inequality: Instruments For or Against?”. The panel examined how policy actors instrumentalize knowledge policies to increase and decrease the state of inequality between citizens, between nations, and between the world’s geographical regions. As a point of departure, the panel assumed that policymaking is a complex process, involving multiple actors across governance levels with diverse interests and preferences, and that instrument choice thus reflects the policy actors’ ambitions, compromises made, and the intended effects of implementation. 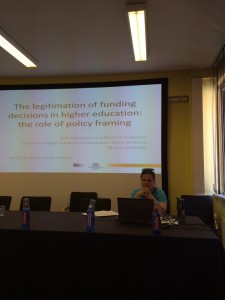 The panel consisted of three papers. First, Dr. Martina Vukasovic from the Centre for Higher Education Governance Ghent (CHEGG) at Ghent University presented a paper entitled “The legitimation of funding decisions in higher education: the role of policy framing” that she co-authored with Dr. Jelle Mampaey (also CHEGG). The paper explored the frame elements employed by various actors – government, higher education institutions and associations, student unions etc. – in the public debate on increasing tuition fees in Flanders. The paper in particular distinguished between three frame elements – cognitive, normative and causal – and explored which actors use which frame elements and whether this mix changed over time. The findings from the Flemish case highlighted the strong reliance on causal elements – claims about expected effects of specific policy decisions – as well as increasing use of normative elements as the debate progressed. In addition, the actors who argued against the increase of tuition fees employed the normative elements more often than the actors arguing against. Second, Dr. Deanna Rexe from Simon Fraser University presented her research paper titled “Tuition Policy Instruments in Canada: Public Policy Choices for What Problems?“, which explored policy actor perceptions of higher education problems and policy instruments in Canadian higher education policymaking systems, and their effects on both substantive and procedural policy instrument selection. 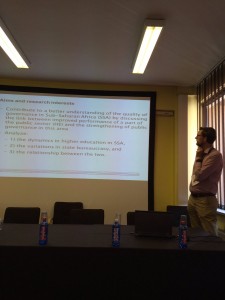 Finally, Dr. Jens Jungblut from the International Centre for Higher Education Research (INCHER) at the University of Kassel presented a paper that he co-authored with Prof. Peter Maassen from the Department of Education at the University of Oslo. In their study, entitled “The Quality of Governance in Sub-Saharan Africa: Comparing Intra-regional Inequalities in Higher Education”, the authors used higher education as an exemplary part of the public sector to explore three sets of changes: 1) the dynamics regarding higher education’s provision of service to society, 2) recent changes in the quality of governance in higher education, and 3) the relationship between the two. They assume that due to higher education’s growing importance for national development strategies in Sub-Saharan Africa as well as the importance of the quality of governance for social progress, it can be expected that there is a link between an improved provision of service to society and increased quality of governance. In their conceptualization of the quality of governance they follow Fukuyama and suggest that the two main dimensions of the concept are capacity and autonomy of the administration. As their research project is still in the phase of data collection, the authors were only able to provide some empirical results on recent changes with regard to the delivery of services to society. Their results showed that universities in Sub-Saharan Africa significantly increased their student enrollments, numbers of graduates as well as the number of research articles produced. In a second analytic step the authors plan to survey and interview a number of administrators both in higher education institutions and the government to assess potential changes in the quality of governance in the sector as well as relate these findings to the ones regarding the delivery of service.

The 25th World Congress of Political Science will take place in July 2018 in Brisbane (Australia).