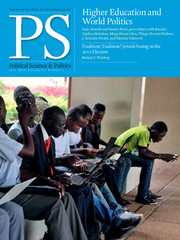 In recent decades the world has witnessed massive expansion of higher education. The total number of universities is continuing to expand, as is the total percentage of the world’s population receiving college degrees.[1] Many governments, most notably in the Middle East and Asia, are spending large amounts of money on higher education in the hopes of creating new opportunities and pathways for economic development. However, even as politicians recognize universities as important sites of international trade, economic development, geopolitical strategy, and elite socialization, higher education nonetheless remains fairly absent from scholarly conversations about international relations and world politics.  While there is a growing body of policy-focused research on the “globalization of higher education,” and an equally sizable literature on particular challenges facing various national and regional higher education systems, there has been less of an interest in broader question: How might we begin to think universities as themselves locations of world politics?

For those interested in this question, we would like to bring your attention to a symposium—“Higher Education and World Politics”—recently published in PS: Political Science and Politics (July 2014).  Originating with a series of panels organized at the International Studies Association’s general meetings (2011 through 2014), this symposium is itself a transnational conversation among scholars in North and South America, Asia, and Europe concerning how the social science literature—and that of international relations and world politics in particular—might better understand and theorize universities as significant political actors.

Drawn on cases from different regions in the world, the pieces in this symposium draw upon various regional analyses to make broader claims about how to begin thinking about the multiple and varied ways in which universities not only affect international relations but are themselves locations of world politics. The first piece, by Isaac Kamola, pushes back against the claim that African universities lag behind a globalizing trend, arguing instead that their colonial and postcolonial histories actually make them exemplars of “the global university.” Neema Noori’s piece examines how norms of academic freedom travel (or fail to travel) to the Middle East via branch campuses and private American-style universities.

A contribution on European policy formation by Meng-Hsuan Chou studies the numerous challenges faced by those working towards the integration of European higher education, and the mobility of scholars in particular. In her chapter on post-communist Serbian universities, Martina Vukasovic argues that treating universities as single international actors ignores the fact that universities are not homogenous entities but rather institutions constituted by individuals and groups that—especially during times of great political contestation—often find themselves in competition against each other. Salvador Peralta and Thiago Pacheco’s piece offers a detailed analysis of why leftist parties in Latin American, many of which came to power on a platform of education reform, have proven unable to enact sweeping changes due to domestic and international constraints. Rasmus Bertelsen rounds out the symposium with a historical account of the Christian-American missionary universities created in the Middle East, and the role they played in extending reverse soft-power—namely, giving host countries an avenue by which to inform American policy towards the region.

Higher education and the production of ‘the global’

Taken as a whole, these cases offer important insights into the various ways in which universities might be thought of as important actors in world politics. First, universities are seen as playing an important material role circulating people, money, ideas, and field expertise. While much of the conversation about “globalization” focuses on locations such as cities, financial hubs, international institutions, and production facilities, this symposium offers a number of compelling reasons why universities should also be added to this list.

Secondly, while there is much talk about interconnection among universities, the world of higher education is also incredibly heterogeneous and asymmetrical. International ranking schemes like the Times Higher Education Rankings and Academic Rankings of World Universities (Shanghai Jiao Tong University), after all, frame universities as firms competing within a highly competitive “global” playing field. The world of higher education, therefore, might be understood as a point of tension between the isomorphic trends towards a “world culture” of higher education, on one hand, and a diversity of lived realities, national and statist agendas, historical and cultural settings, and cultural terrains, on the other. In other words, universities might be thought as points of considerable “friction”[2].

And, finally, just as universities reproduce existing social and power inequalities, they also provide important opportunities for resistance and transformation. Universities around the world have historically served as institutions the open a space for thinking the world differently and for cultivating domestic and global contestation.

It is our hope that this contribution begins a more widespread conversation among social scientists about the role our colleagues, our students, and our institutions play in the making of world politics. Doing so will not only provide a more robust understanding of universities as political and economic institutions, but also expands the conceptual contours of what counts as “world politics.”

Isaac Kamola is an assistant professor of political science at Trinity College, Hartford, Connecticut, the United States. His research examines how the material transformation of post-Cold War higher education in the U.S. and Africa inform how the world came to be imagined as “global.” His scholarly work has appeared in International Political Sociology, British Journal of Politics and International Relations, Journal of Higher Education in Africa, Third World Quarterly, Polygraph, and Transitions as well as numerous edited volumes.

This blog entry has been simultaneously posted on ERA CRN website.

[1] I would like to thank Neema Noori for his help writing this post and editing the symposium in PS.