How has doctoral education been changing in Europe and the U.S? Why, and what are the implications for researchers, institutions and wider society? Two experts opened this debate at the start of a project to train early stage researchers Universities in the Knowledge Economy (UNIKE). Prof. Pavel Zgaga from the Centre for Education Policy Studies, University of Ljubljana, Slovenia, and Prof. Maresi Nerad, from University of Washington, Seattle, The United States (US) gave comprehensive accounts of how doctoral education had developed in the last decades in the EU and the US respectively. This offered the possibility to compare and contrast the current flagship models used in these two geo-political regions and consider possible challenges for the future. 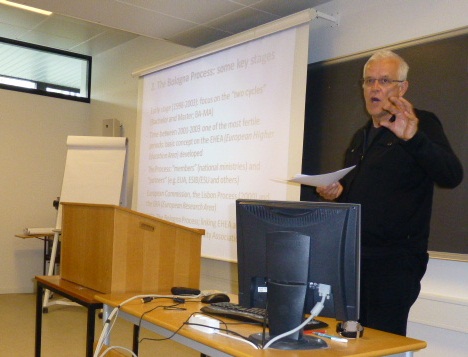 Bologna Process and Europeanisation of the doctorate

In parallel to the Bologna Process, which was initially an initiative of national ministers, the European Commission aimed to create a European Higher Education Area (EHEA) and a European Research Area (ERA). These two strategies came together in the idea of a ‘Europe of Knowledge’ which related both research and teaching to industry and the economy. This brought doctoral education onto the agenda.

The first political statement that was made on doctoral education was the Communique from the Berlin meeting of the Bologna Process (2003):

‘Conscious of the need to promote closer links between the EHEA and the ERA in a Europe of Knowledge, and of the importance of research as an integral part of higher education across Europe, Ministers consider it necessary to go beyond the present focus of two main cycles of higher education to include the doctoral level as the third cycle in the Bologna Process’ (Bologna Process, 2003: 7).

The European Commission then funded the forum for university leaders, the European Universities Association (EUA) to run a project called ‘Doctoral Programme for the European Knowledge Society’ (2004-2005), which resulted in the ‘Ten Basic Principles’ of doctoral education, discussed at a Bologna Process seminar in Salzburg (February 2005).

The document gave rise to long disputes about the definition(s) of the ‘European doctorate.’ One of the main challenges was finding a common ‘structure’ for the doctorate. Other goals of the doctorate were then established, for instance that it should be centered on interdisciplinarity and should prepare people not just for academic jobs but should give them the ‘transferable skills’ to work in industry and across the ‘knowledge economy.’ The communique also outlines the aim to increase the number of doctoral holders. As Professor Zgaga put it, ‘that forty ministers could reach agreement in this document was a huge step.’

In this context, the important question is: what does Europeanisation mean for doctoral education? A series of issues is still open for discussion. Arguably, the increase in the number of doctoral degrees signaled a transition from elite to mass doctoral education. Does this devalue the degree? Yet attempts were also made to improve the status of doctoral candidates by treating them as ‘early stage researchers’ (ESRs) (Bologna Process 2005: 4). EURODOC, the European Council of Doctoral Candidates and Junior Researchers, has been playing a key role in this respect. Can higher education institutions afford to employ rising numbers of ESRs and give them the working conditions of research staff rather than students? ESRs in the ‘Europe of Knowledge’ are not just expected to write a thesis on ‘cutting edge’ research but to acquire an array of ‘transferable skills’ and workplace experience at the same time. Does this ‘overload’ the degree and the ESR him or herself?

The interdisciplinary doctorate – a U.S. flagship

One of the main distinctive features of the U.S. doctoral education system is that it is decentralised, meaning that it is not regulated by a national or federal ministry of education, like it is in European countries. This is the reason why, historically, one cannot talk about ‘reform’ in U.S. doctoral education, since initiatives have never been taken at ministry level, but there have been important ‘changes’ brought about by funding agencies, within institutions and at the departmental level.

Doctoral education in the U.S. has steadily expanded since the Second World War and in the present context of globalisation and the knowledge economy, doctoral education has become increasingly market-driven. This market-driven, demand and supply orientation encourages competition between various doctoral programmes and also creates the need for comparison between them. To this end, doctoral programmes use similar systems of quality assurance, which lead to a greater standardisation of doctoral education and link them into broader processes of accountability.

If innovation is the means to achieve economic prosperity, doctoral education is seen as a way to train innovators for various sectors. Doctoral education is subjected to both external and internal forces to higher education that connect it to the demands of the labour market and, as in Europe, the doctoral degree has become a commodity that has value beyond academic knowledge production.

The National Science Foundation has initiated one particularly successful model of doctoral education called IGERT (Integrative Graduate Education and Research Traineeship). Highly competitive funding is awarded to selective institutions to develop research doctoral programmes with the following features: engaging novel research themes; developing inter/multi or transdisciplinary approaches; based in research teams; building professional and personal skills into the curriculum; preparing students for academic and non-academic careers, via connections to the outside world; and encouraging international components.

To use Gibbons et al.’s (1994) terminology, both the European and U.S. debates focus on a shift from ‘Mode 1’ knowledge production (traditionally known as the ‘apprenticeship’ model)  towards  ‘Mode  2’,  which  places  a much greater emphasis on interdisciplinary, transferable skills and collaborations with industry as ways of preparing doctoral students for the labour market. In this context, the question is what is happening to the academic focus on equipping researchers theoretically and methodologically to think critically and independently and explore a problem they are ‘burning’ with enthusiasm to solve?

Bologna Process (2005a) Doctoral Programmes for the European Knowledge Society. Conclusions and Recommendations of the Bologna Seminar held at Salzburg, 3-5 February.

European Commission (2005) The European Charter for Researchers: The Code of Conduct for the Recruitment of Researchers. Brussels, Belgium: Directorate-General for Research, Human Resources and Mobility (Marie Curie Actions).

European Commission (2010) Communication from The Commission to the European Parliament, the Council, the European Economic and Social Committee and The Committee of the Regions. Europe 2020 Flagship Initiative Innovation Union. Brussels, 6.10.2010 COM(2010) 546 Final. SEC(2010) 1161.