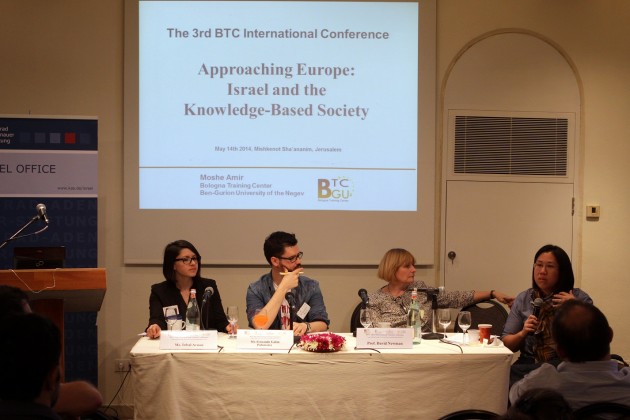 The conference “Approaching Europe: Israel and the Knowledge-Based Society”, jointly organized by Ben-Gurion University of the Negev’s Bologna Training Center (BTC) and the Israel office of the Konrad-Adenauer Foundation, sought to examine the European experience in higher education policy and reform, focusing on the European Higher Education Area (EHEA) and Bologna Process in particular, in order to shed light on this global process and explore the implications for the Israeli higher education system. Against the backdrop of the diverging trends in Israel; the lack of a clear governmental policy on the one hand and the strengthening of ‘bottom up’ initiatives on the other, the conference aimed to draw lessons from the European experience and to strengthen the understanding of current patterns in order to better grasp the policy implications for Israel. To this end, this year’s conference brought together faculty, students, practitioners and governmental representatives for a joint discussion on these matters.

While Europe has developed policies towards its higher education systems based on the vision of academic institutions as engines of growth for both economic and social development, Israel has yet to bring higher education policy to the forefront of the public debate. This is clear with regards to the development of academia-industry links. Although Israel is considered as a global power house for high-tech industries, the governmental level has yet to develop a strategy for binding the industry to academia for mutual benefit. While activities and programs promoting ties between industry and higher education in Israel do exist, they remain mainly local and sporadic initiatives within institutions themselves.

There is great potential for Israel to learn from the European experience in the area of higher education. However, in the absence of an articulated national policy towards the European Higher Education Area and the Bologna Process, the Israeli higher education system risks floundering as Israel’s society and economy distance themselves from global trends. Similarly to the case of the industry-academia collaboration in Israel, the academic cooperation with the European Higher Education Area is primarily driven by “bottom up” initiatives. There is an increasing interest and desire by Israeli higher education institutions to strengthen ties with Europe in the academic sphere. That being said, such initiatives have yet to be led by the National Council for Higher Education or other governmental bodies.

A missing perspective: Students are stakeholders

At the forefront of the conference discussion was the increasing importance of including student bodies as equal stakeholders in the various processes shaping higher education policies. Representatives from both the European Students’ Union (ESU) and the National Union of Israeli Students (NUIS) presented their perspective on the issues involved in the development of ‘knowledge-based’ societies. The growing European- level student platform was described by the ESU representative. Through its wide-ranging activities, the ESU underlines the importance of considering students as full members of the university community as opposed to “consumers”. As highlighted by the NUIS representative, the Israeli system lags behind in encouraging student involvement in policy issues related to higher education. Consequently, the student perspective is not typically represented in discussions on higher education policy and reform. Including the student view set the stage for a continued discussion on the importance of student representation and involvement in higher education governance in the country.

The student representatives were asked to assess the distinction between the concept of knowledge-based economy and that of knowledge-based society. Are these terms inter-changeable? Are there contradictions between them? Both the European and Israeli representatives discussed the fact that the idea of a knowledge-based society incorporates the economy but not necessarily vice-versa. Using the term knowledge-based society allows a wider perspective of the university’s missions.  The student representatives also related to the issue of employability as a major concern. However, they noted that while economic factors are important, they should not come at the expense of the university’s social mission. The fact that higher education should also be concerned with preparing students for active citizenship, personal development as well as maintaining a broad and advanced knowledge base was highlighted.

Another important message highlighted by several speakers, was the fact that Israel has yet to develop a clear position vis a vis the Bologna Process and other global trends in the field of higher education. The importance of promoting ties and cooperation with Europe through various channels like Tempus and Erasmus Mundus projects was emphasized. While Israel is not a signatory member of the Bologna Process, there is a growing interest in participation in European funded projects as well as strengthening ties with European institutions in the academic sphere.  In particular, Israeli institutions are increasingly interested in understanding the Bologna Process and its various features in order to potentially implement them within their programs. For instance, in order to promote student mobility between European and Israeli institutions, it is crucial for Israeli universities and colleges to understand the ECTS (European Credit Transfer and Accumulation System) and to have a compatible system in place for credit transfers from Europe to Israel and vice-versa. The conference lectures strengthened the fact that these initiatives, while growing, have until now remained at the institutional level.

The comparative view between the European and Israeli discourses on the role of academia in society shed light on the fact that Israel is lacking a genuine debate over the future missions of academia. The discussion which evolved during the conference highlighted the fact that an articulated strategy for an “Israel of Knowledge” is crucial. The Bologna Training Center hopes that this discussion, relating to the overall quality, modernization and internationalization of higher education systems, will continue to develop through future events and activities in Israel.

Yoav Freidman, Hannah Moscovitz and Hila Zahavi are PhD students in the Department of Politics and Government in Ben-Gurion University of the Negev. They also work as project coordinators at the Bologna Training Center.

One Response to Approaching Europe: Israel and the Knowledge-Based Society