Looking for the geographical dimensions of Framework Programmes

The EU Framework Programme (FP) is by far the most important European intervention for research and technological development (RTD). While this policy has been repeatedly reformed, the FP has also shaped European research since 1984. The largest part of the FP aims to promote transnational RTD projects granting funds for ‘excellent research’ (the so-called ‘FP-Cooperation’, which covers about two thirds of the whole budget), irrespective of their geographical localisation. However, as our study on the geographical distribution of FP participation shows, ‘excellent’ research is also unevenly spread across Europe.

Why is important to study the geographical distribution of FP participations? There are two major reasons. First, in the political debate there are claims for an equal distribution of funds across member states, implicitly claiming for a correction on the criteria of ‘scientific excellence’ that is considered to be biased in favour of most advanced countries. Second, in the scientific literature, research has been largely recognised as a fundamental input for ‘regional systems of innovation’ (RSI) (Cooke et al., 1997; Iammarino, 2005; Moulaert and Sekia, 2003). Since 1990s, RSIs were identified as good practices for a transition through a ‘knowledge-based economy’ based on synergies among universities, firms and governments (Etzkowitz and Leydesdorff, 2000). In this perspective, the understanding of where ‘excellent research’ is carried out contributes to identify the ‘research competitiveness’ of European territories, and then how this support regional innovation capacities.

Our research aims to identify what characterises the spatial distribution of FP participations, despite a policy rationale driven only by ‘scientific excellence’ regardless geographical dimensions. Our analysis reveals the existence of two driving forces:

These two forces are combined and they interact to shape European research geography. We define the resulting geography as an ‘open polycentrism’ where there are multiple centres with high rates of FP participation, but these rates change and in turn determine the rise of newcomers and the decline of those unable to keep their ‘competitiveness’. The concept of ‘open polycentrism’ is articulated in three different features:

Beyond network analysis, towards a geographical perspective

Where is ‘excellent research’ carried out? If FP projects are selected only for their ‘scientific excellence’, the distribution of FP participants can be assumed as indicator for where excellent research is. For this purpose, the EU Commission’s database named CORDIS was largely used by scholars to analyse participations providing a large literature on how scientific communities are structured around Europe (Autant-Bernard and Chalaye, 2013; Autant-Bernard et al., 2007; Barber and Scherngell, 2013; Barber et al., 2011; Heller-Schuh et al., 2011; Wanzenböck et al., forthcoming). These analyses were very useful to understand partnerships’ networks that show the progressive integration of national research communities towards a ‘European Research Area’, however, little is said on the geographical dimensions and long-term evolutions due to significant limitations in available data.

An innovative database, developed in the context of the ‘Geography of Research in Europe And Territorial Policy Innovations’ GREATPI project, allows for a very detailed analysis. First, each FP participant has been associated with its geographical district (NUTS3), providing a better focus in comparison to previous analyses that considered just the regional level (NUTS2). Second, a long process of data cleaning allows long-term analysis during last decade from FP5 (1999-2002) to FP7 (2007-2010[i]). For the purpose of our analysis, we have selected three FP-Cooperation’s themes: biotechnologies (KBBE), energy and environment. These FP themes represent about one fifth of the whole FP-Cooperation and were selected because they represent some of the societal challenges and are fully comparable across FP periods, while other themes changed.

Something more than just a core-periphery system

In the field of geography, the ‘core-periphery’ theory is well known: high-quality functions (in this case the ‘excellent research activities’) tend to be concentrated in the core leaving the periphery with only secondary functions. This concentration was already identified by several authors also in the case of FP participation (Autant-Bernard and Chalaye, 2013; Barber and Scherngell, 2013; Barber et al., 2011; Heller-Schuh et al., 2011), however, what was missing was the dynamic perspective of how this ‘core’ evolves. To test the hypothesis of an ‘open polycentrism’, we extracted the top-5 percentile of districts in terms of FP participations from FP5 (1999-2002) to FP7 (2007-2010) in the three selected themes (Biotechnologies – KBBE, Environment and Energy), and plotted them as shown in Figure 1. By this simple comparison, it is possible to understand how the performance of top-performing districts changed over time. Before entering into the discussion, a general observation is necessary: the sample includes the entire EU as well as Associated Countries, such as Turkey, Switzerland and Norway among others, that participate in the FP with the same funding and rights as EU member states. Furthermore, the selected period corresponds with the full integration of new member states, which were already fully involved in the FP policy since 1999.

In Figure 1, there are three major findings. First, there are several observations with always high and stable rates of FP participation (the ‘core’). This is the effect of the cumulative nature of research because those that were the most advanced research centres are more likely to keep on being on the frontier of research, also thanks to FP providing extra funding to further advance. Second, in this core there are multiple districts with comparable performance and just one (Paris, on the top-right), which is decreasing its leading position. Third, looking to districts with lower performances there is a significant dynamism with many observations far from the diagonal, implying that their performances significantly changed from FP5 to FP7. This is the case for both districts able to increase their rate of FP participations and for those reducing it; nonetheless, it should be noticed that observations joining the ‘core’ does not come from zero participation, and this further confirms the cumulative nature of research. On the other hand, this dynamism is determined by the open competition of FP calls. 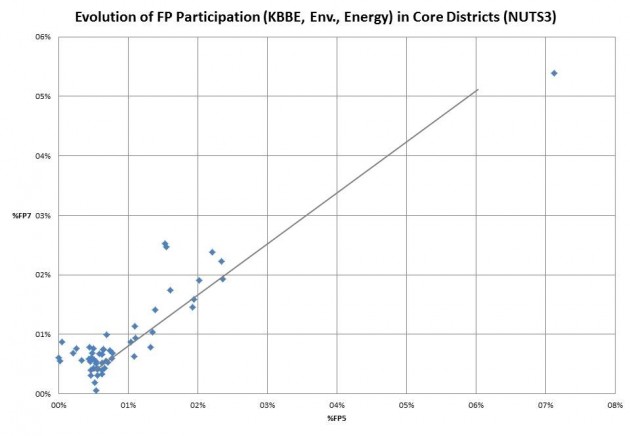 How is this possible? There are two main reasons to explain this ‘open polycentrism’. First, Europe is a large space with several ‘centres’ and the open calls for FP funding allow all the research centres to participate and compete for those funds. Second, the FP is just one of the RTD policies active in Europe: member states have their own national and regional policies to support their own research centres. This support implicitly affects the rate of FP participations because member states can develop internally their own research centres, and then improve their ‘European competitiveness’ in FP calls.

What are the lessons that can be derived from this exercise for the EU Horizon 2020 programme?

First, the FP is really a competitive mechanism. The criteria for ‘scientific excellence’ is really open and offer opportunity for newcomers to increase their rate of participation without any guarantees for those who won in previous calls. The claim that funds go always to the same research centre is, in fact, false or, more precisely, there is space for newcomers to increase their rate of FP participation. It should be highlighted, moreover, that the FP-Cooperation programme does not aim to increase the research capacities, but only to fund ‘excellent research’. While the EU has had only minor programmes to support research capacities, member states are the main actors responsible for these investments.

Second, ‘excellent research’ is not for everybody, but this does not mean that second-level districts should give up their RTD investments. If the FP participation is an indicator of research competitiveness, this shows space for those investing in RTD to reach the level of ‘European excellence’, although it should be recognised that FP is not the only programme funding ‘excellence’ and other sources are available. This should be seen as good opportunities because it provides a return for districts investing in their research competitiveness that can be measured in terms of FP participation.

Third, an open issue exist regarding synergies with Structural Funds (SF), which are often used to promote RTD investments. The EU regional policy aims to support lagging regions promoting territorial convergence; however, not any region benefiting from SF is in the FP (an open polycentric) core. While this can be seen as a contradiction, it comes with no surprise. If the FP aims to support ‘scientific excellence’ at the European level, lagging regions are expected to have a long-way before joining the frontier of research; otherwise, they would not be ‘lagging’ and would appear as part of the core at certain periods of time. Bearing in mind that the FP is only about 7.5% of the public funds spent in Europe for RTD, there are other possibilities to increase research competitiveness of regions/districts, but these would rely on the member states.

This analysis identified the forces explaining the spatial distribution of FP participations. Findings show how competitive and dynamic the European research geography is in terms of FP participations; however, this mechanism is open for those already having RTD capacities that are able to reach the top performing core starting from mid-level performances. Indeed, there is an open issue regarding territories without ‘excellent’ RTD actors. The availability of a new and geographically detailed database will allow for further and more specific analysis of the European research geography.

This blog post is based on an ongoing research which will be presented at the ERA CRN workshop ‘Governance of the Europe of Knowledge’ Cambridge University, 10-11 April 2014.

Etzkowitz, H and Leydesdorff, L, 2000, “The dynamics of innovation: from National Systems and ‘mode 2’ to a Triple Helix of university-industry-government relations” Research Policy 29(2) 109–123.

Prof.Dr.Bas Van Heur is an assistant professor in social geography and director of Cosmopolis (VUB).

View all posts by André Spithoven →

2 Responses to The Dynamism of the European Research Geography